N/A
Zatanna Zatara is a sorceress and a member of the Justice League.

Zatanna is a slim woman dressed as a magician, with a tall black top hat, white dress shirt and corset, gray leggings, and a thin black jacket with purple edges. She also wears a light purple bow tie and golden bracelets. She has long brown hair, grayish eyes, and light Caucasian skin.

In the 1980s, she helped imprison Queen of Fables in a U.S. Tax Code book after she was stopped by the Justice League from taking over Gotham either army of storybook characters.

In "The Line", after a judge ruled that Fables' punishment was cruel and unusual. Zatanna freed her from her book in the courtroom before she was picked up and taken to Arkham Asylum.

In "A Fight Worth Fighting For", Zatanna freed Superman, Wonder Woman, Flash and Green Lantern from Queen of Fables' storybook where they had been trapped as revenge for what happened to her. 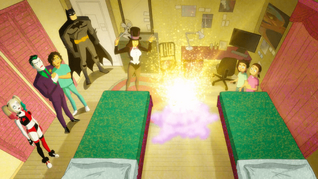 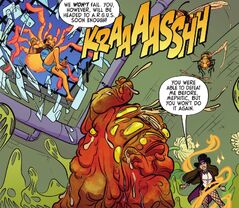 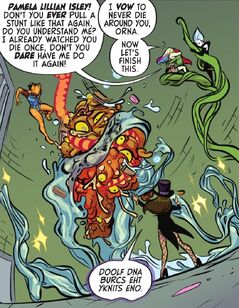