Our community needs more information on this page! Can you help out? Click here to add more.
Issues: sections missing in biography

Andy Daly
Two-Face is a recurring character on Harley Quinn and major antagonist of the second season.

He is a supervillain and member of the Legion of Doom and the Injustice League.

Two-Face wears a black and white suit similar to what he wore in Batman: The Animated Series and sharing bubbly blue skin complimented with dark red lips on his deformed section of face.

Harvey Dent was an opportunistic state attorney overseeing the Arkham Asylum for much of his life until one side of his body was horribly burned, leading him to a life of crime.

The night before he was up for reelection, Harvey Dent was working out with a young and not-yet broken down and jagged Jim Gordon. The Joker had revealed that he had planet a bomb somewhere in Gotham City and Dent needed to find out where it was in order to secure his next big win, although he pretended to care about the lives of the people in the city. They brought in new psychiatrist Harleen Quinzel who praised him for his work as DA which he appreciative, asking if he could count on her vote the next day and telling her giving her two pins with his face on them.

After the Joker deceived them all, actually having placed the bomb in a Arkham employee and using t escape, Harvey Dent and the Arkham guards were hot on their trail. Having the Joker in sight, Harvey Dent told the guards to shoot but they hesitated as he was carrying Harleen and it would be impossible to hit him without going through her. Harvey angrily exclaimed how they didn't care as he was sure that he could not win the election if he let Joker free. The guard took the shot but the bullet was stopped by Poison Ivy. Harvey eventually caught up with them and instructed the guards to "kill them all". However, Poison Ivy then surrendered so they lowered their weapons and took her and the Joker back to Arkham. Harvey tried to smooth things over with Harleen, making light of what happened and promising her a promotion at which point she spit in his face and telling him to "fuck off, two-face".

Two-Face is present at The Penguin's nephew Joshua Cobblepot's bar mitzvah where he sat at a table with Scarecrow and Bane when Harley Quinn arrived at their table. However, the Joker soon arrived and drove her off, yelling at the table to laugh with him, which they reluctantly did. He later watched as Joshua Cobblepot prepared to kill Harley, only for Harley to end up escaping. The Joker then ordered the Legion of Doom members present to attack Harley. They managed to surround Harley but when Joker berated Bane, Harley questioned why they all let Joker talk to them like that, making them lower their weapons and think.

Two-Face was present at the Legion of Doom's prospective member night when Harley Quinn and KGBeast were nominated against each other to join the Legion of Doom. He stood in the crowd as Harley was officially announced as the winner.

Two-Face applauded as Harley Quinn and her crew were officially welcomed into the Legion of Doom.

Two-Face sent out goons to take over Gotham while he continued robbing and pillaging as usual, until one day while robbing a bank his own goons turned on him, incited to strike out as independents following Harley Quinn's speeches to them. In response, Two-Face and many other former Legion of Doom members formed together into the Injustice League so that they could get their goons back and carve up New Gotham for themselves. After calling Bane stupid during the first meeting, he nonetheless declared that they needed structure and goons in order to run organized crime.

❝ It goes supervillain, sidekicks, goons that went to Harvard, and then goons. ❞
— Two-Face

Two-Face readily agreed with the rest of the Injustice League during their first meeting that there must be a hierarchy, much to Harley's anger. After Harley smashed through their table and map, Two-Face helped The Penguin to explain that they intended each Injustice League member to control a territory of the city, unmolested by each other. Harley rejects this idea and smashes through the table, so Mister Freeze freezes her in a block of ice. Together with the rest of the Injustice League, Two-Face lobbies to murder Harley, but Mister Freeze convinces them all to keep her alive as a trophy, so Two-Face settles for mocking her and retiring to his allotted territory.

In the remnants of the Injustice League, Two-Face expresses his concerns after hearing that Harley "took down" Mister Freeze to the only other remaining member, Bane. Although he continues to mistreat him, refusing to let him sit in one of the office chairs, and laughing when he mentions having though of something. Even so, Bane makes the astute suggestion that they join forces to protect themselves against Harley Quinn, but Two-Face is still contemptuous of Bane and confident that he can handle Harley Quinn. He rejects Bane's offer, continuing to mock him. Later, Two-Face attempts to rob a bank although is confused when the employee exclaims to not be afraid of him anymore, citing Batman's recently announced return.

Two-Face
You and me, an equal partnership. Fifty-fifty.
Bane
Hmm. Does this have anything to do with Batman coming back?
Two-Face
Can I be honest with you?
Bane
Of course.
Two-Face
It does not.
— Two-Face won't be honest.

Panicking over Batman's return, Two-Face invites Bane back to Gotham City Hall, apologizing for his previous behavior and gifting him with his own executive office chair and a drink, before revealing he has changed his mind about a alliance. Although he is suspicious that Two-Face only reconsidered the alliance due to Batman's return, he nonetheless accepts so long as it's a 50-50 partnership. Immediately however, Two-Face shows Bane the branding he has worked on which literally only has a picture of himself on it, with Two-Face claiming that the shadow represents Bane and the "two faces" includes the both of them.

After Bane fights Batman, who even him though Two-Face was working alone doubting their "equal partnership", Bane busts through the wall and demands respect from Two-Face. He convinces Bane to calm down so they can talk. Two-Face compliments Bane for beating up Batman although tells him they should just kill him when they get the chance rather than simply leaving him wounded. Bane then insists they need to rethink their name but Two-Face insists that the name is not the problem but rather that Bane needs his own space to do his best work. He takes him to the desert where he gifts him a huge hole in the ground which Bane is deeply moved by.

"All the Best Inmates Have Daddy Issues"

Main article: All the Best Inmates Have Daddy Issues

After running in to a seemingly sane Joker, Harley Quinn recounts their first days working at Arkham Asylum many years prior when Two-Face had not yet been deformed and was Gotham's district attorney, including how she was the one who first came up with his current name. After retelling their backstories, she and Poison Ivy existed Noonan's Bar only to be captured by Two-Face who exclaimed how he was now DA again and they were under arrest.

"There's No Place to Go But Down"

Main article: There's No Place to Go But Down

Two-Face is being transferred to Arkham Asylum with James Gordon riding with him in the van. Two-Face mocks him for not receiving ing a key to the city alongside the other heroes and after being locked in his cell, gives Gordon some "advice" telling him he should run for Mayor. He manipulates him into believing he needs to do something big and heroic to win the public over, mentioning Poison Ivy and Kite Man's upcoming wedding which will be filled with hing-profile criminals.

Later, in the cafeteria, Two-Face uses this to his advantage, telling Harley something will disrupt Ivy's wedding, and he'll only tell her what if she helps him break out. Although she is initially skeptical, he guilt-trips her into agreeing. While breaking out together, he reveals Gordon's plan to bust the wedding before going their separate ways.

Harvey Dent, or Two-Face, is a crime lord who resemblances a typical mafia or mob boss in his actions. He is almost always calm under pressure, such as when Commissioner Gordon shot at him in the Gotham City police station he hardly flinched. He, like several other villains in Gotham, takes delight in essentially bullying Bane, insulting him directly or laughing at him. He believes in the existence of a "hierarchy" in the criminal underworld, with people at and above his status at the top. Like in many other interpretations of the character, he commonly decides the fate of others with the simplicity of a mere coin flip, giving his victims a decent chance of survival. He seemed to enjoy Harley's company in the season 1 episode, "A High Bar", although later on, at the beginning of season 2, he becomes rather anti-Harley similarly to his remaining colleagues. He uses intimidation and threats to get what he wants, acting on his threats without hesitation if he originally fails, as seen when he and his goons shoot of the privates of multiple Gotham police officers when they refused to comply. The only person he has ever taken orders from The Joker. He hates coconut flavored sparkling water.

Even before being a supervillain, Two-Face showed to have a decent amount of negative personality to be classified as a villain since he cared more about his re-election as state attorney than public safety and ruthlessly ordered the shot at Joker even though that shot could have killed both Harley Quinn and Joker at the same time.

Unlike his counterpart in mainstream comic books, this version of Two-face doesn't seem bothered by multiple-personality disorder. In addition, Two-face also demonstrates high skills in manipulating others with lower intellect, such as Bane, to his advantage. 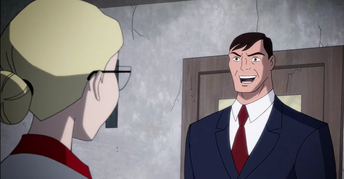 Harvey Dent before he became Two-Face 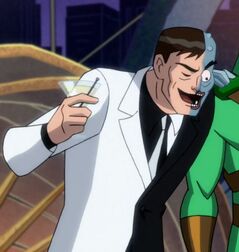 Two-Face at the L.O.D. party 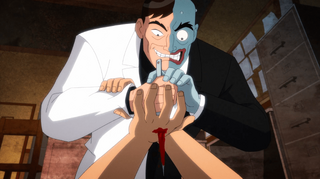