Til Death Do Us Part

Til Death Do Us Part

In the series premiere, Harley Quinn is fed up being the Joker's sidekick and strikes out on her own – determined to become the criminal Queenpin of Gotham City.

Harley Quinn is introduced attempting to steal a pyramid of money from rich yachters, although they don't take her seriously. It's only when the Joker rips off the captain's bloody face from his own that the rich gentlemen become afraid, and although Harley tries to get them to jump into the harbor, the Joker simply kills swathes of them with an acid bomb, stealing Harley's thunder again.

As Joker fights off the remaining armed gentlemen, Harley keeps pestering the Joker to be his full partner and to join the Legion of Doom. Joker deflects until Batman arrives and then flees in a submarine alone, leaving Harley to distract Batman. The Joker assures Harley that he'll break Harley out of Arkham Asylum "before breakfast". She is then taken for interrogation by Commissioner Gordon, where she refused to give up any information because of her and the Joker's "true love", citing the time the Joker "proposed". Gordon sentences her to life in prison, but Harley insists she'll be freed within the day.

Harley then spends 6 months in prison waiting for the Joker, all the while with Poison Ivy trying to convince her that the Joker doesn't care for her. After three more months, Harley insisted that the Joker throwing her into a vat of chemicals helped shape who she was. Three months after that, the entire prison insisted to Harley that the Joker wasn't coming back for her. The Riddler then gave Ivy a seed to use to escape, and while she offered to take Harley with her, Harley insisted on waiting for "Mistah J", so Ivy simply knocked her out and took her.

Afterward, Harley awoke in Ivy's apartment and immediately insisted on going back to the Joker. Ivy stopped her, however, and praised her skills as a psychiatrist showing her a picture of her past self, which started talking to barely, prompting her to apply her analyses on herself. She diagnosed herself as being in an abusive relationship and needing to find her own identity before snapping out of it and realizing that she has to leave the Joker. She arrived to break up with him, but he spun a story about how he left her in Arkham to protect her from increased police scrutiny. He then offered to take her back because their love was "more powerful" than the threat of death, so they then had sex while Ivy left.

In exchange for freeing the Riddler from Arkham, she had him advertise a riddle so funny it would kill you. This aggravated the Joker, prompting Harley to kill the Riddler, only to find Batman also arriving to fight him. He captured them both in glass balls suspended over pools of "acid", demanding that Joker choose one to live and one to die. Surprisingly, the Joker chose to save Batman to deny Riddler the satisfaction of killing him, prompting Batman to chase after him while Harley fell into the "acid".

While submerged, Harley remembered that the Joker never really proposed and only said "till death do us part" after leaving her to be a suicide bomber to defeat Batman, which Batman saved her from. Ivy then pulled Harley from the acid, which was actually margarita mix, and revealed that she set it up to prove to Harley that the Joker never cared for her. She then changed her outfit and broke up with the Joker publicly, prompting him to send his goons after her.

Harley fought them all off and destroyed the Joker's lair, leaving him in a pile of rubble at her mercy. He asked if she was going to kill him but she spared him, wanting to see the look on his face when she surpassed him as a villain and runs Gotham.

See also: All images from "Til Death Do Us Part" 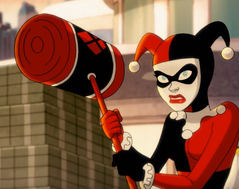 The introducton of Joker

Ivy kidnapping Harley, having knocked her out with a pheromone toxin

Joker chooses between Batman and Harley

Joker is beaten by Harley
Community content is available under CC-BY-SA unless otherwise noted.
Advertisement