The crew gathers in Gotham Central Park to bury Poison Ivy. Harley and Kite Man are too distraught to speak, while Clayface gives a touching eulogy that was lessened by the fact that he copied it from Star Trek. After the burial is finished, an angry Harley is now determined to kill Joker once and for all, but is warned by Doctor Psycho that they will need a plan first. Harley then meets Batman and Commissioner Gordon at the Bat Signal, and convinces a reluctant Batman to help them infiltrate Joker's lair. Her plan is to have Clayface transform into Batman to distract the Joker, while the real Batman sneaks up behind the Joker and ambushes him.

The crew then approaches Joker's tower, with Clayface disguised as a tied-up Batman, while the real Batman drops into the tower from outer space. Believing Clayface to be a birthday present, Joker insists on Harley singing him "Happy Birthday", to which she reluctantly agrees. However, Clayface is unable to hold back his acting habits and begins to sing along, giving the ruse away to Joker. Harley launches a rocket at his tower and knocks the Joker aside, but this distracts the real Batman long enough for the Joker to escape into an air-tight chamber. Gas immediately floods the room, knocking Batman out, after which point the Joker takes the rest of Harley's crew as hostages while a bounty is put on Harley's head.

Joker spends the next week torturing his captives (removing King Shark's teeth with pliers for a necklace; forcing Dr. Psycho to watch non-stop footage of feminist rallies; spinning Clayface around like a clay jar in an art class; pushing Sy down a tall flight of stairs; turning Batman into the equivalent of a cuckoo clock bird) while ruling Gotham with an iron fist (regularly telling jokes on TV and sending vans to kill anyone who doesn't laugh). Eventually, though, he grows bored with the torture. Hoping to help reawaken his passion, Scarecrow removes Batman's mask and reveals his secret identity as Bruce Wayne. An enraged Joker points out that was the least fun aspect of their relationship and uses his acid to kill Scarecrow while scolding Bruce about a delayed electric car from Wayne Enterprises he already put a down payment on.

Uncertain of what to do and deeply missing her best friend, Harley returns to Ivy's grave, where she finds Kite Man and Frank having taken up residence at the spot. Kite Man informs Harley of Joker's plan to kill her crew just prior to an 80's themed party, so Harley decides to confront Joker by herself. As she walks away, one of the roses on Ivy's grave blossoms and sheds a tear.

Harley returns to Joker's tower with a bomb strapped to her chest, threatening to kill herself if he does not release her crew. Upon arriving at his penthouse, Joker tries to convince her to put on her old, full-body costume. Refusing, she threatens to detonate the bomb and take him with her unless he lets the crew go. However, Joker reveals the crew is trapped in the penthouse with Batman and that triggering the bomb would kill them as well. Harley finds herself reluctantly putting the costume on once more, and Joker releases her crew, who are touched that she would risk her life to save them.

Joker launches into a speech about how Harley needs him as much as he needs her. Naturally, Harley doesn't buy it but pretends to to get close enough to Joker to stab him. Unfortunately, he tries the exact same thing at the exact same moment, and the two get into a fight with identical stab wounds. Though able to hold her own for a little bit and landing several more wounds on the Joker, Harley is ultimately overwhelmed and defeated. While daring the Joker to just kill her already, Joker makes it clear he never intended to kill her.

Harley is taken to a room with a vat of chemicals that Joker explains will erase her memories and abilities as Harley Quinn once she is thrown in. As she looks down at the vat, she notices vines starting to grow on the side and quickly gets an idea; she convinces Joker to allow her to jump in as one last act of Harley Quinn. After she jumps, Joker starts to walk away victorious, until realizing there was no splash. Harley is lifted up by the vines, being controlled by a resurrected Ivy. Joker's henchmen are quickly disposed of before Joker himself is grabbed and hung over the chemicals. Harley scolds him for his treatment of her over time and how she now has friends that treat her with the respect she deserves and tells Ivy to drop him into the chemicals. The two girls run to hug one another as Harley talks about Ivy being resurrected by her tears of sadness. Although Ivy insists it was merely the renewing power of nature, she admits the tears played a part in it to cheer Harley up.

After failing to escape the vat, Joker triggers a bomb that starts to destroy the tower and most of Gotham (by soon triggering an 8.6 earthquake). Batman is able to escape and rush to the chemical room just in time to push Harley and Ivy out of the way of a collapsing roof, but is apparently crushed himself. The two briefly contemplate whether or not he survived before getting out of the tower themselves. Then, as Gotham descends into chaos, Harley and Ivy reunite with the crew on a nearby rooftop. Doctor Psycho and King Shark praise Harley, while Ivy points out she was able to get rid of Joker, the Justice League, and the Legion of Doom, as well as sending Gotham into anarchy, to which Harley responds "it's so beautiful!" as they watch the city burn.

In the remains of Joker's tower, Joker's hand bursts out of the rubble with a laugh. Before long, however, the acid begins to take effect, and his skin tone starts to change from pale white to a normal flesh tone. His laugh then suddenly loses its raspiness and transitions to normality, implying Joker has turned back into a regular person.

See also: All images from "The Final Joke"

The Joker takes over Gotham City

King Shark tortured by the Joker 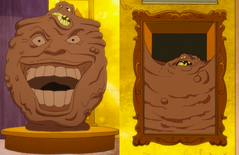 Clayface torturously reshaped by the Joker

Joker falls into the acid 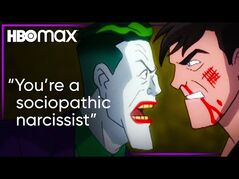