So You Need a Crew?

So You Need a Crew?

Realizing she needs a crew to pull off heists that will attract the Legion of Doom's attention, Harley attempts to recruit Dr. Psycho and Clayface.

Harley Quinn attempted to steal a nuke from a train, only to have the Joker steal the score due to his goons helping him. In response, Harley decided to seek out a crew. Poison Ivy objected however, pointing out Doctor Psycho who was singlehandedly taking on Wonder Woman on live TV by himself. However, when she pushed Psycho away, he angrily exclaimed, "that really hurt, you cunt!" This prompted the entire earth to stop spinning, and Psycho ended up embroiled in a massive scandal over it, with Harley insisting that if only he'd had a crew, "they'd have told him to use the B-word instead".

Harley then tried to recruit several goons even as Psycho had a PR team cover up his swearing. Unfortunately however, Harley only had access via the Joker, and was rejected while she was alone. She then attempted to recruit in a bar, but everyone declined, and one even jumped into a "hell portal" to avoid working with her. Doctor Psycho also told her not to bother opening her "female trap", as he wouldn’t work for her either. Harley was introduced to Clayface however, a shapeshifter who seemed open to working with her, but he quickly got into a fight with Psycho. Kite Man then arrived and immediately got the entire bar to join his new heist crew.

Out of options, Harley went to see motivational speaker Maxie Zeus regarding becoming a villain. He advised getting a crew, but insisted that no villain would ever work for a woman. Ivy herself claimed there was a "glass ceiling" for supervillains, that the last time a female villain, Queen of Fables, became powerful, all of the superheroes came down on her and magically bound her to a tax book.

Harley decided then that she needed crew members who were the lowest of the low to accept her leadership. They watched Doctor Psycho's appearance on television as his wife left him, only for him to once again become enraged and use a slur. This prompted the Legion of Doom to banish him, saying Psycho "does not represent our brand of evil", so Psycho decided to join Harley, as did Clayface.

Their first scheme was to rob Maxie Zeus, with Clayface pretending to be Zeus' long lost son while Harley and Psycho snuck inside his manor. Eventually Zeus discovered the ploy and began to attack Clayface, although Harley already had stolen his gold and so revealed herself to him. She then had Psycho attack Zeus while she beat him up with a bat, ordering him to tell the world that Harley Quinn did it to him. Seeing this, the media claimed that Harley Quinn might become the Joker's competitor, much to his anger. Harley then used the gold to trade for a warhead, which she used to blackmail the city into renaming a highway after her.

See also: All images from "So You Need a Crew?"

"I need a fucking crew"

"Your independence is quite inspiring" - Frank the Plant 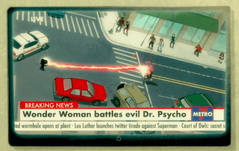 Prominent villains during the 1980s

The Justice League vs Queen of Fables

Doctor Psycho with his family on Tawny's show 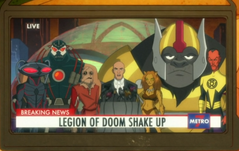 Clayface as a hunchbacked mailman

Harley and her crew makes the news