Harley & Ivy go undercover as college students to take down Riddler, who’s made himself dean of the local university with sinister plans for students.

Harley continues plotting her attack on the Injustice League, but is hampered by the lack of electricity and lighting in the Gotham Mall after Gotham City collapsed into a lawless wasteland. Although Doctor Psycho made candles out of dead zebras, Harley decides that power has to be their top priority, and plans to go to Riddler University, the only place with power, to steal it from the Riddler. Clayface offered to help them go undercover using his "Stephanie" character, but Harley and Poison Ivy excluded him from the operation. Meanwhile, King Shark and Doctor Psycho head out to hunt down an industrial water purifier.

After caking themselves in makeup to hide their bleach white and green skin, Ivy enlists Kite Man to fly herself and Harley into the Riddler's university, who jokes that Ivy would be "green with envy" if she saw him with "you hot young coeds". Disgusted, Harley launches herself off the kite prematurely while Ivy, pleased by the joke, lands normally. Harley and Ivy then introduce themselves to Barbara Gordon as "Heather Witherbee" and "Izziadora Staplebuntkin", respectively. Although Barbara immediately becomes suspicious of their odd names, "Stephanie" arrives and pulls it out of the fire, as apparently Clayface is well known in the university under that alias. Despite Harley's anger that Clayface disobeyed her orders not to join the mission, they have little choice but to accept his help.

Meanwhile, Doctor Psycho and King Shark successfully acquire a water purifier, but quickly come under attack by Two-Face's goons. While they deal with that, Harley and Ivy have little luck finding the Riddler and soon see someone who questioned the Riddler get dragged away by goons. According to "Stephanie", only the Riddler is allowed to question anything, so Harley sends Clayface off to find the Riddler given his clear knowledge of the university. After he departs, Harley notices someone who looks like the Riddler, so she attacks him and knocks him into a fountain. However, it quickly becomes apparent that this is just a mascot, and Harley's makeup now begins to slough off due to the water in the fountain, revealing her identity.

Barbara notices this and flees, using some sort of parkour or acrobatics to escape even Harley Quinn. However, Harley and Ivy track her down to her dorm and break in, only for Barbara to ambush Harley and hold her at bay with pepper spray. Ivy then disarms her and demands to know if she was going to tell the Riddler about them, but Barbara actually claims to want someone to stand up to the Riddler. She turns up music in her dorm to mask their voices, and explains her worry about several mysterious disappearances happening in the university. After dismissing Jim Gordon, who came out of the shower to get a beer (he is depressed and living with his daughter after getting divorced), Barbara shares her theory that people are going missing at a particular fraternity. Harley then steals the wrist bands that Barbara had to a party there and leaves her.

Meanwhile, King Shark and Doctor Psycho are still pinned down by Two-Face's goons. Out of options, King Shark then overhauls a small car to accommodate Doctor Psycho's short legs and to add a mounted turret and armor to it, allowing King Shark to fire back at the pursuing goons while fleeing. At the same time, "Stephanie" is with his college friends, play-acting at being conflicted over his "maybe-boyfriend" Chad. It gave him a VIP wrist band to the party Harley and Ivy are going to, however, so Harley sends Clayface into the VIP area to look for the Riddler. Clayface ends up taking too long, so Harley and Ivy break in.

Harley and Ivy are shocked to discover that the Riddler forces college students to run on human hamster wheels to power the university. The Riddler himself then arrives, intent on capturing them for his hamster wheels, and reveals that he knew well in advance that they were Harley Quinn and Poison Ivy, not regular college students. He threatens them with his "riddle stick", and although they laugh at him, he uses it to unleash an electrical discharge that easily knocks them both out, resulting in their capture.

Back with King Shark and Doctor Psycho, they finally managed to leave their Two-Face pursuers behind, but it turns out that they simply stopped following them because they left Two-Face's territory and entered Bane's. Although Doctor Psycho is contemptuous of the goons at first, they inject themselves with needles that increase their size, easily brush off King Shark's bullets, and destroy their car.

Clayface, still deeply in character, laments the fact that Chad set him up to be captured by the Riddler by giving him a VIP wrist band, saying that he broke his charity ring for Chad. Harley attempts to get him to snap out of it and orders him to transform into something "skinny" to escape his bonds, but he then cries at being called "fat", prompting Harley to begrudgingly admit that it's his best character work she's seen. Barbara Gordon then arrived to save them, dispatching a guard and clumsily attempting to shoot the power switch to the generator. She misses but tosses her gun at the Riddler and knocks him into it, causing the generator to fail and release the human hamsters.

Clayface, Harley, Ivy, and Barbara then fight through the rest of the Riddler's goons. Afterward, Harley, Ivy, and Clayface take the Riddler back to "Arkham", but they put him on a hamster wheel of his own in the Gotham Mall, giving them power. Doctor Psycho and King Shark then arrive with the water purifier, wearing the outfits of Bane's goons that they defeated. They are proud of having defeated half of Two-Face's army, Bane's goons, and having built a death car, but it turns out that the water turned to normal after power resumed, so the purifier isn't even necessary anymore.

Finally, in Barbara's dormitory, she decided that she liked the thrill of fighting the Riddler, and so took on the mantle of Batgirl.

See also: All images from "Riddler U"

Doctor Psycho in a Zebra hat 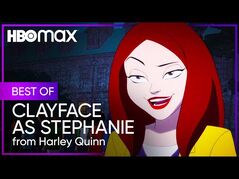 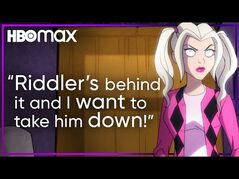