The Riddler's Lair is a location in Gotham City. Modeled after the famous Sphinx found in Egypt, it is where the Riddler lived and also where he planned out most of his crimes.

This is where the Riddler kidnapped Harley Quinn and Batman, suspending them over vats of acid and forcing Joker to choose between them, although this was all a ploy orchestrated by Poison Ivy in order to prove to Harley that the Joker did not love her. This is also where the Riddler filmed his riddles when he interrupted the regular broadcast with his threats to Gotham.

It was destroyed during "The Final Joke" when the Joker's earthquakes tore apart the city. 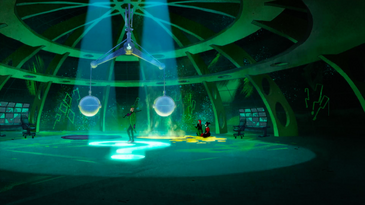 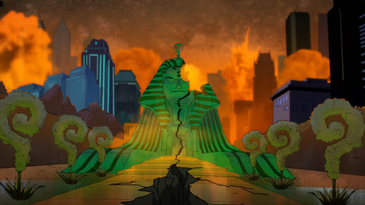 Riddler's Lair is destroyed by the earthquake in "The Final Joke"
Community content is available under CC-BY-SA unless otherwise noted.
Advertisement