Our community needs more information on this page! Can you help out? Click here to add more.
Issues: Biography section needs to be expanded, Personality section is missing

❝ I ate an orange and shat out a seed! Thanks, Ivy. ❞
— Riddler

The Riddler is a recurring character on the T.V. series Harley Quinn. He was a minor character in the first season and one of the main antagonists of the second.

He is a former member of the Legion of Doom and the Injustice League and teams up with Doctor Psycho to take down Harley Quinn and rule Gotham.

Riddler is a bald, white male with a question mark tattoo on his forehead. He wears a green overcoat with question marks, a black undershirt, and purple suit gloves. He usually carries a green staff shaped like a question mark.

Following the events of the episode "Catwoman" and all the way to "Dye Hard" the constant running in the Hamster Wheel has caused him to build up a pronounced muscular physique. To emphasize his new build, Riddler now wears a green leotard with a question mark on his chest.

During Doctor Harleen Quinzel's time working at Arkham Asylum, Riddler had long black hair with bangs parted two-thirds on the left side and one on the right side of his forehead. At that time, he began balding.

Main article: Til Death Do Us Part

The Riddler was serving time at Arkham Asylum along with Harley Quinn and Poison Ivy and ridiculed Harley for sounding like a broken record regarding Joker, agreeing with the other villains that he was not coming to get her. He helped aide Poison Ivy's escape by providing her with a seed which she used to grow big plants and break herself, Harley and the Riddler out. To repay his debt for breaking him out, Ivy had Riddler help her set up a trap to show to Harley that the Joker did not love her. The news reported on the Riddler having created a riddle "so funny it makes people's explode", provoking the Joker who claimed to be Gotham City's funniest villain. In response Harley went to Riddler's Lair to kill him.

When both Harley and Batman arrived, the Riddler captured them both and suspended them in containers over pits of acid. The Riddler called Joker over and told him he needed to choose which to live and which to fall into acid. Unsurprisingly, the Joker chose to save Batman, not wanting to give Riddler the credit of killing Batman. After Harley was saved from the "acid" (which turned out to just be margarita mix) Riddler made sure that he and Ivy were square. When Ivy complained to Harley about the difficulty of finding 150 gallons of the margarita mix to which the Riddler said he had told her to get a Costco card.

The Riddler showed up at Martha's Bruce Steakhouse, claiming to be hungry. Despite not having a reservation he was immediately given a table.

The Riddler was present at the Legion of Doom's prospective member night when Harley Quinn and KGBeast were nominated against each other to join the Legion of Doom. He was seen mingling with Man-Bat and later The Penguin. He applauded after Harley defeated Aquaman who had crashed the party and later when she was announced as the winner and new member of the Legion of Doom.

The Riddler was present when Harley was officially welcomed into the Legion of Doom.

After quitting Harley's Crew, Clayface started working as a good for Riddler. Riddler interrupted the broadcasting of a football match, telling the citizens of Gotham that he had hidden a bomb somewhere in the city. When the Riddler started citing his riddle for Batman to find it, Clayface interrupted him, saying the riddle along with him and telling him he was "doing great, boss". He eventually got so annoyed that he just revealed the bomb was at the corn factory and cut the feed. When Harley showed up and asked to borrow Clayface, Riddler told her to take him forever.

While terrorizing New Gotham, the Riddler suddenly found his own goons rebelling against him, forcing him to make common cause with the remnants of the Legion of Doom, forming the Injustice League to help them all regain their goons and carve up Gotham for themselves. He agreed with Bane that the need for goons was pressing, saying that "if everyone's a villain, then no one is".

At the first Injustice League meeting with Harley, the Riddler mocked her as the reason why they banded together. He mocked Bane's complaints about being in a folding chair, saying that it was a joke at his expense. He also mocked Harley herself, saying that she would receive the "bad part" of new New Gotham once divided into territories. Harley rejected the idea, and so Mister Freeze froze her into a block of ice. The Riddler and the rest of the Injustice League argue to kill Harley at this point, but Mister Freeze convinces them to keep Harley as a trophy instead, sparing her life, so the Riddler simply mocks Harley within her ice block instead.

With the Injustice League now ruling the city, the Riddler took over the local university, turning it into Riddler University. He aired commercials for his university on screens overlooking the city, capitalizing that the university was the only place in Gotham that still had intact power and running water. He made announcements over the speaker systems at the university with the riddle "what is priceless but still costs 60k a year," with the students all replying "Riddler U. It's better than Harvard" in unison. He had cameras set up to monitor all his students, and when any of them rose up against him, he had his goons take them.

As Harley Quinn and Poison Ivy went undercover as students to infiltrate the University, they teamed up with student Barbara Gordon who shared her theory that people are going missing at a particular fraternity. At the party, Harley and Ivy follow Riddler into a secret VIP area and are shocked to discover that the Riddler is forcing college students to run on human hamster wheels to power the university. The Riddler himself then arrives, intent on capturing them for his hamster wheels, and reveals that he knew well in advance that they were Harley Quinn and Poison Ivy, picking it up from their outdated clothes and Harley's pig-tails. He threatens them with his "riddle stick", and although they laugh at him, he uses it to unleash an electrical discharge that easily knocks them both out, resulting in their capture.

Riddler then forced them to run in his machine but Barbara Gordon then arrived to save them. Riddler ordered one of his goon to kill her but she dispatches him, slightly impressing the Riddler. He sent then called out more guards to take her on and ridiculed her when she picked up the dead goon's gun, asking if she was going to shoot them all. She instead aimed at the power-switched but missed and threw her gun at the Riddler which knocked him into it, causing him to be electrocuted and the generator to fail. Harley and Ivy then took the Riddler back to Gotham Mall, putting him on a hamster wheel of his own to give them power.

Whilst running on his hamster wheel, the Riddler spots Doctor Psycho wheeling a load of biscuits for Harley's hyenas, asking him to toss him one so he can "carbo-load". When he refuses, the Riddler starts teasing him, especially when he claims he should have been invited to the Injustice League and been given a piece of the city. The Riddler continues to ridicule him until he gets so provoked he attempts to mind-control him. And when he is unable to do that, he starts using his telekinesis to throw various lotions and body products at the Riddler who only laughs at his antics.

❝ It's a wasteland out there. In here, I get three squares, plenty of cardio. I am in the best shape of my life, plus, there's free entertainment, watching you idiots fail to accomplish even the simplest of tasks. I'll escape when I'm good and ready. ❞
— The Riddler

The Riddler uses the lotions to slip out of his restraints and flee. He leaves a written riddle, again making fun of Doctor Psycho and teasing his whereabouts. Doctor Psycho organizes a search for him around the mall but the Riddler continues to taunt him from his hiding place, even getting a walkie-talkie and hijacking their conversation. After accidentally being tranquilized by Sy Borgman, Doctor Psycho is captured by the Riddler who puts him in his place in the hamster wheel. However, when the rest of the crew eventually finds them, the Riddler surrenders, having grown to enjoy his place as a prisoner, and releases Psycho, reclaiming his place on the wheel.

"All the Best Inmates Have Daddy Issues"

Main article: All the Best Inmates Have Daddy Issues

Riddler
Riddle me this. Who's in over her head and should've majored in communication?
Doctor Quinzel
Jokes on you. That was my minor.
Riddler
The joke was on me.
— Harleen and Riddler banter

Harley recounts her first day working as a psychiatrist at Arkham Asylum, showing the Riddler trying to discourage her whilst he was brushing his then long, black hair in his cell. Although she is unfaced by his comments and even banters back. As Harleen walks away, the Riddler realizes that he is starting to lose his hair. Later, he made a bet with Poison Ivy about whether the Joker would kill her or not with the Riddler winning, having bet 20 dollars that she would survive.

The Riddler teamed up with Doctor Psycho who quit Harley's crew and helped him escape the mall. Riddler and Psycho then staged a hostage situation at Wayne Tower as a distraction while the Riddler snuck in and stole a telepathic amplifier helmet for Psycho. While in the process of stealing it, he ran into Harley who had visited the bar and was hand-cuffed to the now-sane Joker. Not interested in his ramblings about how he escaped, Harley only questioned how he ended up becoming so buff, which he attributed to running on the hamster wheel. He nearly recognized the Joker, so Harley frantically denied it, swiftly leaving the area as Riddler was shooting at them with his staff.

Later, at the roof of Wayne Tower, Riddler confronted Harley and her crew, giving the helmet to Psycho and thereby revealing their new partnership. Although Clayface mistakenly first assumed they were dating. Psycho used the helmet to assume command of the entire Parademon army that was running loose in Gotham. A fight ensued and Riddler engaged in hand-to-hand combat with Harley. With Harley and her crew initially holding the upper hand, Doctor Psycho created an impenetrable telekinetic barrier around Wayne Tower, then took command of Clayface and King Shark, giving Harley no choice but to flee, getting through the barrier with the help of Sy Borgman.

Main article: A Fight Worth Fighting For

The Riddler has been taken back to Arkham Asylum where he is spending his time flexing his muscles in his cell. 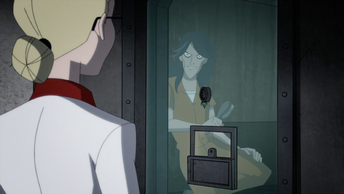 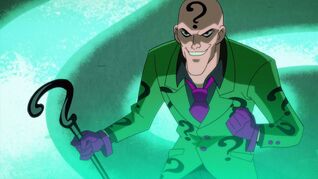 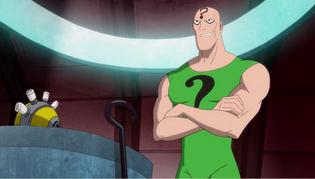