Our community needs more information on this page! Can you help out? Click here to add more.
Issues: Sections missing in Biography

❝ Oh, you've got a line? Hey guys, she has a line. Superheroes have a line. Teen Titans have a line. We don't give a fuck! ❞
— Queen of Fables to Harley Quinn.

Queen of Fables is a character on the T.V. series, Harley Quinn and was a recurring antagonist of the first season.

Harley Quinn used to look up to her as a role model, but realized she took things too far after witnessing her mass-murdering habits when they teamed up.

Queen of Fables is an African-American female wearing golden armor, consisting of a chest plate, tall necklace-like jewellery, golden circular earrings, thin golden lines on the top of her boots, and what is either partially golden hair or a crown.

She wears light purple, high-heel boots that almost reach her knees, pinkish-red leggings, and hot pink long gloves that cover almost the entirety of her arms. She wears a light purple headdress-like clothing which appears to be an extension of either her neck jewellery or dark purple cape, also cut into the shape of a large leaf.

She has pinkish-red hair above the golden portion that seems to be made to look similar to a flame. She wears hot pink, shiny lipstick and has a small heart red heart on her right cheek near her eye, which seems to be a tattoo, although it could be a mark of sorts.

Queen of Fables is the first female supervillain who almost destroyed Gotham in the '80s. She was a powerful sorceress and fed up with her position not among the male supervillains, she single handily turned Gotham City into an evil forest, using her magic to pull characters from the pages of storybooks until she had a whole army at her command. Unfortunately, her plans were stopped by the Justice League and she was sealed in a U.S. Master Tax Guide Book instead of being sent to Arkham Asylum. She has been acting as a tax consultant for over 30 years until she was released from the U.S. Master Tax Guide Book.

Main article: So You Need a Crew?

Poison Ivy told Harley Quinn about the Queen of Fables after Harley tried to recruit her to her crew. Ivy insisted there was a "glass ceiling" for female supervillains and told her how The Queen of Fables was a sorceress who conjured an entire army. When Harley asked what happened to her, Ivy gave her a card and told her to ask her herself. Harley went to Taxes 4 Free where she met the Queen of Fables who told her how the Justice League came after her and her crew and instead of throwing her into Arkham Asylum like any male villain they had Zatanna Zatara imprison her inside a U.S. Tax Code book. She made a point of the double standards when it comes to male and female villains, saying she couldn't even get a crew so she had to create her own.

This gave Harley the inspiration to seek out villains who were downtrodden and disrespected, desperate enough to work for her.

As Harley and her crew faced the Justice League, Fables arrived and revealed that she had been working together with The Joker, capturing The Flash, Green Lantern, Wonder Woman and Superman in her storybook while they were distracted by the trees and Harley's crew. She taunts Harley for not killing her when she had the chance and uses the beanstalk from Jack and the Beanstalk to send Harley and her crew up to a castle in the clouds, where they are threatened by a giant. Kite Man helps them defeat the giant and return down below, where she once again attacks them, this time aided by the Big Bad Wolf dressed as Little Red Riding Hood's grandmother. Clayface attempted to deter the wolf with a disguise, but failed. The Wolf returned to the Queen of Fables with Harley's bloodied head in its mouth, seemingly successful in killing her. However, Harley reveals it was a ruse, though, which Fables admits was good. She was killed by Harley Quinn with a bat, which decapitated her. King Shark had defeated the Wolf and ate most of its insides so Harley could use its skin as a disguise.

She's heavily implied to be a sociopath. Superficially, she's charming and spirited but is quick to reveal that she has no second thoughts about using mass murder as a solution to literally any problem and not caring if other criminals are horrified. She is ruthlessness and cold-blooded, arguably even more os than any other villain in the series due to her "destroying to bloodline" policy. Ivy describes Fables as "cable bad" and a person who definitely belongs in Arkham Asylum for life. She also shows that she has no remorse or conscience, as well as displaying a serious lack of empathy; besides not caring for those she murders, she seems unable to realize how her fellow supervillains could be disturbed by her actions or see her actions as rightfully excessive.

She is a chain smoker. She apparently finds Superman attractive. Harley created a Tinder page for her to "get her fuck on".

See also: All images of Queen of Fables 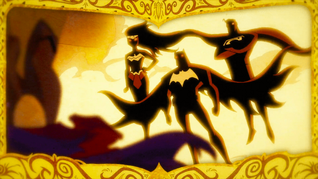 Queen of Fables is stopped by the Justice League 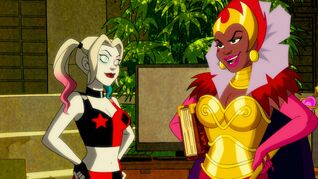 Fables teams up with Harley 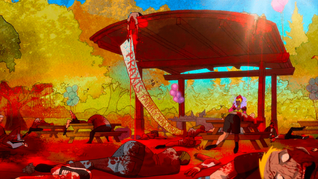 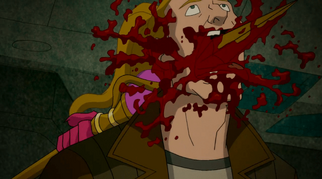 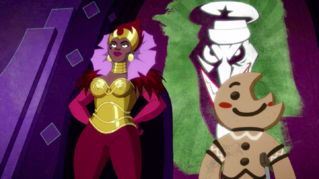 Fables and Mark in "Devil's Snare"
Community content is available under CC-BY-SA unless otherwise noted.
Advertisement