Poison Ivy's Apartment was a safe house owned by Poison Ivy. It was where she, and later, Harley Quinn, planned out most of they're crimes until the owner of the building, Sy Borgman evicted them.

The apartment survived the 8.6 earthquake created by Joker in "The Final Joke".

After escaped from Arkham Asylum, Ivy took Harley to her apartment and made her settle. During the first two weeks of room sharing, Harley smashed 9 TVs, making Ivy unwilling to bring her good TV out. Ivy Purchased several Noguchi coffee tables but they were destroyed by several reasons, mostly by Harley's reckless behavior.

As Harley started recruiting people for her crew the members started hanging around, annoying Ivy as they messed up the apartment with Clayface staining her carpet and Doctor Psycho coming home drunk and burnt and a hole through the countertop while trying to mind control the microwave. Their behavior got her into trouble with landlord Sy Borgman who threatened to kick her out if they continued to mess it up. Sy finally evicted her in "Finding Mr. Right" on the grounds of having broken the "no pets" rule after new crew member King Shark spent a lot of time at the apartment.

In "Being Harley Quinn" the crew got ready to leave the apartment but after Harley had an episode they went into her mind to help her, leaving their unmoving bodies to be found on the living room floor. Sy was showing a new couple around the apartment when he found them and canceled the viewing to dispose of what he believed where the dead bodies of a suicide cult. They later woke up just in time to not be burnt alive and found their new base at Gotham Mall, the abandoned mall where Sy almost killed them.

Sy presumably let Ivy back into her apartment later on as she can be seen still living there in later episodes. 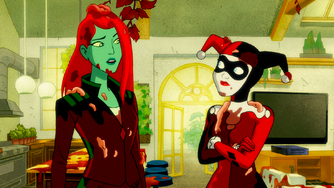 Harley and Ivy in the living room when a Joker's henchman was blown up. 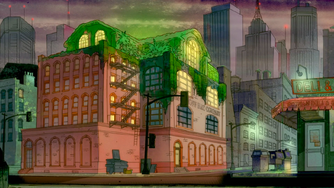 View of the building 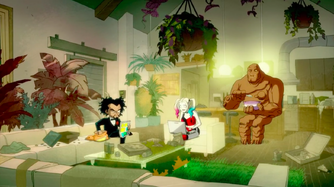 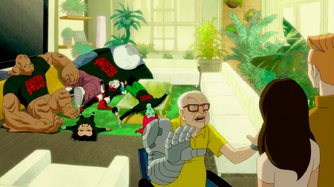 Add a photo to this gallery
Retrieved from "https://harleyquinn.fandom.com/wiki/Poison_Ivy%27s_apartment?oldid=7215"
Community content is available under CC-BY-SA unless otherwise noted.