Harley Quinn Wiki
Register
Don't have an account?
Sign In
Advertisement
in: Characters, Villains, Legion of Doom Members,
and 4 more

Wayne Knight
The Penguin was a minor antagonist of the DC Universe animated series Harley Quinn.

He worked alongside Joker as a member of the Legion of Doom in the first season and was a founding member of the Injustice League in the second before he was killed by Harley Quinn who stabbed him in the throat with the broken part of her bat.

As his name suggests, the Penguin bears physical resemblances similar to a penguin, a long nose, a round, short body, and always wearing black and white clothes. He is seen wearing a black top hat, a monocle with a gold rim, a black frock coat with a pinkish-red flower, a white dress shirt, a charcoal waistcoat, a black cravat tie, black pants, and dress shoes. He often sports a cigarette holder in his mouth and has light skin and slicked back brown hair. Shortly before his demise, his nose is bitten off entirely by Harley Quinn, leaving him with open, bloody nasal cavities.

Oswald was born a deformed man and an orphan along with his sister at the early age. he realized that he wanted to become a crime lord when he had his bar mitzvah. His successes as a criminal were so highly regarded in the Legion of Doom that they created a gold statue of him in the entryway.

The Penguin is first seen when Harley Quinn invites herself to his nephew, Joshua Cobblepot's bar mitzvah. He initially mistook Harley as a dancer for the bar mitzvah, and laughed when he realized that it was Harley Quinn herself, saying that "rock bottom came fast since the Joker dumped you". Later, he gave a speech for Joshua's bar mitzvah and claimed that he was forcing his dream of doing crime onto Joshua. He planned for Joshua to "fight" through Gotham Chucklehut's finest improvisers, dressed as guards, so that he could rob a mock bank vault.

When the curtains were raised, Penguin was stunned to see that Harley had dispatched the improv troupe, having mistaken them for the actual Gotham Mint security. Enraged that Harley ruined Joshua's bar mitzvah, the Penguin smoothly shot a tranquilizer at Harley from his umbrella, incapacitating her. After she was bound by his goons, he gave Joshua his umbrella so that he could execute Harley, but ended up caving to the pressure of Harley's needling. Disgusted, the Penguin prepared to execute Harley himself, but Kite Man and Poison Ivy arrived and Harley then freed herself from her bonds.

The Joker then sicced the Legion of Doom members present on the trio, including the Penguin. The Penguin disarmed Harley with a surgically precise shot, and together they managed to surround Harley and Ivy, with Bane capturing Kite Man. Cornered, Harley wondered if Kite Man could help them, at which point the Joker noticed Bane attacking him and ordered him to refocus on Harley. However, he went overboard, calling Bane a "dumb freakish monster", which Harley used to talk her way out of the situation, asking why anyone allowed the Joker to bully them so; this prompted the Penguin to lower his weapon and abandon the Joker. He became further angered at the Joker when Bane revealed that the Joker thought the entire bar mitzvah was stupid and left him surrounded by Ivy's plants.

The Penguin watched the Tawny Young show with his nephew and his sister Mrs. Cobblepot, and became aggravated when Joshua rooted for Poison Ivy against Batman.

The Penguin later attended the admittance party for new Legion of Doom members, and applauded Harley Quinn for driving off Aquaman, who was attacking the gathering.

Oswald also enthusiastically applauded Harley when she was formally inducted into the Legion of Doom.

Following the Joker's defeat, the utter destruction of Gotham City, and its abandonment by the United States government, the Penguin used his goons to move in on the chaos. He began absorbing territory, even calling "dibs" on Harley Quinn's Gotham Mall, sending his soldiers to claim it (without success). In response, Harley Quinn incensed the goons of the remaining Legion of Doom members to revolt against their masters, ruining the Penguin's plans.

In response, the Penguin rallied the remnants of the Legion of Doom into the Injustice League, comprising himself, Two-Face, the Riddler, Bane, and Mister Freeze. They all agreed that they needed loyal goons to continue their ways of life, and so the Penguin came up with a plan to get Harley on board rather than opposing them so that they could quell the goon insurrection. Although Harley responded to their invitation, she rejected the Penguin's proposed terms to divide Gotham amongst themselves. Nevertheless, the Penguin insisted that there must be a hierarchy, so he had Mister Freeze freeze Harley into a block of ice.

The Penguin himself took custody of Harley's frozen statue for two months, taking that time to resume command of his goons and to assert control over his agreed portion of Gotham territory. Within his micro-state he was treated like a celebrity, his loyal subjects always referring to him as "Mr. Penguin". After killing an attendant who annoyed him, he joined a party in his honor at Iceberg Lounge & Casino and gave a brief speech about how he was carving up the city, "and they're thanking us for it". However, Sy Borgman interrupted his speech to sing happy to him as a distraction, and eventually the Penguin insisted that it was not his birthday.

Annoyed, the Penguin used his umbrella to easily dispel the smoke from the room, revealing Harley's crew rescuing her. He ordered his goons after them, and waited patiently in the arcade of his mansion for his goons to isolate Harley in front of him. He gloated before her, only half freed from her block of ice, and although he managed to easily disarm her, he came too close and she was able to bite his nose off. The recoil knocked Harley's block of ice over and shattered it, freeing her to attack him.

More depressed over the loss of his nose than bothered by the pain, he easily dodged Harley's attack with her bat, seeing it shatter on a pool table. Grinning with his face covered in a sheet of blood, he used his umbrella as a grenade launcher to blast Harley away, resulting in more smoke from the explosions. He noted that he should've killed her long before then but lost Harley in the smoke, who began to taunt him from many directions to hide her location. However, the Penguin did not dispel this smoke as he did with easy minutes before and instead stood around doing nothing, attempting in vain to spot her, until she came up behind him and shoved the shattered end of her bat into his throat, killing him.

A picture of him can be seen in a memorial montage during the 83rd Annual Villy Awards.[1]

Oswald Cobblepot, or The Penguin, was a ruthless, organized crime boss operating in Gotham city. He appeared exceptionally confident and selfish at times, viewing himself as magnificent and virtually undefeatable. He seemed to have more consideration for the well-being of innocent people than some other noteworthy villains in Gotham, such as when he made a point of noting how horrible it was of Harley to cripple a group of improv actors during his nephew's bar mitzvah. However, he had both a quick temper and a nonexistent time frame of hesitation to kill those he saw fit to receive death at his hands. He always sprang to pay for only the most high-quality and distinguished goods and employees, as stated by Clayface. He was rather happy to be the powerful and evil crime lord that he was. This interpretation of The Penguin is Jewish, as is the rest of his known family.

Penguin is possibly the sanest antagonist of the series, for he apparently isn't bothered by any abnormal motif or mental illness. 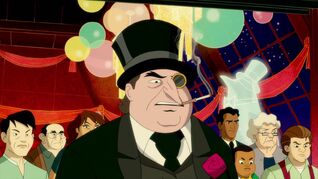 Penguin in "A High Bar" 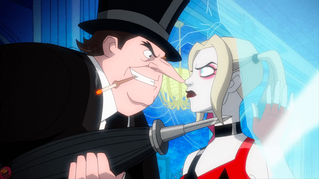 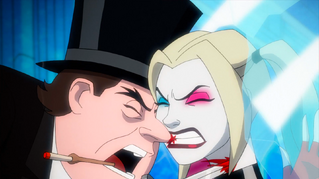