Nicholas "Nick" Quinzel is a minor antagonist of the Harley Quinn animated series. He is Harley Quinn's deadbeat father who is a greedy gambler and con artist.

Nicholas Quinzel married Sharon Quinzel at an unknown age. He fathered two children with her, Harleen and Barry. He was a gambler who constantly got into trouble with the mob and got beaten up for money. At some point, he trained his daughter in Gymnasium but forced his daughter to deliberately fail at the National Gymnasium Championship, which could propel Harley's career to Olympic competition in the end so he could win a bet he made and gain enough cash to pay off his debts. This caused his daughter to be very angry at him and beat him up in front of the audience.

At an unknown point in time, he was arrested for nearly killing an Irishman due to his racism. His son Barry also died sometime during his teens. He was later released and got back with Sharon, though Harley would not learn this for years. He became a pariah for the fact that his daughter was a supervillain. Because of this, he didn't hesitate to hire assassins to kill Harley when he found out a bounty had been put on her which he so he could use it to pay off his debts.

Nick was first seen inside Harley's mind during "Being Harley Quinn" where he could be seen in the background in a family portrait in Harley's "museum of memories" and was later seen in one of Harley's repressed memories of witnessing him being beat up for owing money outside their house.

Nick appeared in full during "Bensonhurst" when Harley returned home to see Sharon, although she was horrified when she reales Nick had been released and gotten back with Sharon. At dinner Harley constantly complained about Nick until Nick called for civility for Grandma Quinzel's sake. Grandma Quinzel told them that she had been diagnosed with brain cancer just before her head exploded in a shower of gore - an assassin was shooting at them. Harley closed the blinds, painted everyone in blood, and had them lay still while the assassin was forced to physically enter the house. As he inspected Harley's "corpse", she redirected his own knife into his chest and pulled him into a chair, demanding to know who he worked for as she pushed the knife deeper. However, before he could give anything away, Nick shot him in the head, claiming that it was revenge for killing Grandma Quinzel.

In the aftermath, Nick claimed that the assassin was from the mob and trying to kill him over a loan he took from them. He and Harley then went to fight them off, with Nick giving her pointers on which gymnastic moves to defeat the mobsters, eventually defeating them all. Nick then earnestly apologized for having her lose on purpose and complimented her skills until he was interrupted by the arrival of one last mobster with a minigun. Nick pushed Harley out of the way and lost his last thumb to the gunfire in the process before Harley killed him. Afterward, Harley and Nick finally appeared to make amends, believing her father to have changed. However, after the returned home, Grandpa Quinzel only for his chest to explode in another shatter of gore from a shotgun blast. Harley then killed yet another assassin and angrily declared that she would keep her family safe, only for Nick himself to shoot at her, the bullet hitting her in the stomach.

Nick explained that there was a $1 million bounty on her head and had tipped off the assassins to kill her so he didn't have to do it himself. He also revealed that he had simply used her wipe out the mob while he waited, but when both assassins failed he intended to kill her. Harley was even more distraught when realizing Sharon was in on it and they continued to argue while she dodged Nick's bullets. Nick insisted that he was just like her, betraying her as she betrayed her crew. Nick threw her through a closet door and attempted to strangle her, at which point Harley pulled a knife on him. Backpedaling, Nick and Sharon then begged for mercy and said that “family doesn’t kill each other”, but Harley disavowed them, saying they aren’t worth killing and stumbled out of the house.

Nicholas is a selfish, greedy gambler who cares more about money than his family's dreams (especially Harley's, because she was a girl). He was willing to kill his own daughter to collect the bounty for her as well as tricking Harley to dispose of all his mob debtors. He is also shown to be racist and sexist, as he hates Irishmen to the point of attacking and nearly killing one and believes there will never be a female president. Furthermore, he felt no remorse for any of his actions. He also didn't seem to care much for his parents or in-laws, as he only showed shock rather than sadness at the murder of Harley's grandparents and quickly got over it. He is also a coward, as he begged his daughter not to kill him while stating that family don't kill each other even though he just tried to kill her. He also seems to be quite unintelligent, as when Harley's grandparents were killed in front of them by being shot through the head and torso, respectively, he thought they were just brought on by their brain cancer and blood pressure instead of them being shot.

He and his wife are also extremely hypocritical as they mock Harley's descend to villainy while never considering that they are largely to blame for her mental illness and poor choice in life due to their selfishness and neglectful parenting. 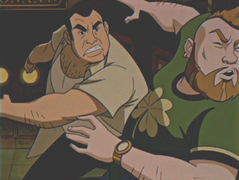 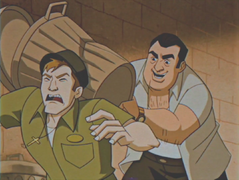 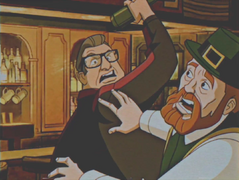 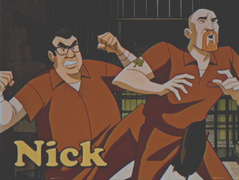