He was a supervillain and a member of the Injustice League. However, he died after sacrificing himself to save his dying wife, Nora, through a lethal blood transfusion procedure.

Victor Fries was the CEO of a multinational corporation tasked with crushing all competitors, including a mom-and-pop cryogenics lab run by Nora. He met her anonymously online and fell in love before realizing that she was the same person he was competing with, so they married, but soon Nora fell ill with a rare blood disease that threatened to kill her. With no other option, Victor froze his wife in a block of ice to halt the progress of the disease and then set out to find a cure. His obsession resulted in him turning into a supervillain to fund his search for a cure, becoming Mister Freeze.

The Riddler
We need goons! Now they all think they're us. If everyone is a villain, then no one is.
Two-Face
And we need to get them back in line. We need structure. Right fellas? We can't run organized crime-
Mister Freeze
Uh… I'm not in organized crime. I'm actually trying to find a cure for my wife's terminal illness.
The Penguin
And how are you funding that?
Mister Freeze
Through organized crime.
— Mister Freeze joins the Injustice League

When Harley Quinn incited everyone's goons to rebel, Mister Freeze answered The Penguin's invitation to form a new group, the Injustice League, to reassert control over their goons and carve up New Gotham for themselves. Although everyone agreed that they needed goons to run organized crime, Mister Freeze initially denied being in organized crime and claimed to only be searching for a cure for his wife, although he did admit that he was using organized crime for that purpose.

When Harley Quinn arrived at the first Injustice League meeting, Mister Freeze presented the proposed map of "new New Gotham" territories, divided between each member. She rejected this plan, so Mister Freeze blasted her with his freeze ray and froze her into a block of ice, but managed to singlehandedly save her life by manipulating the rest of the Injustice League into letting her live as a trophy. He then left her in The Penguin's care and retired to his own territory of new New Gotham.

❝ It is unfortunate that the cold displeases you so much, as the core temperatures of your bodies are about to decrease precipitously. ❞
— Mister Freeze

Mister Freeze took the field with his freeze ray as Harley Quinn and her crew finished battling his goons. Doctor Psycho could not assist them due to the cold, so Mister Freeze easily encased her entire crew in ice with a volley of precision blasts. He captured them all and brought them to his laboratory, where he had been conducting experiments on snow rats in an attempt to find a cure for his wife's rare blood disease. All of them have thus far died, but he's confident that it is only the result of the 2% difference in DNA between the rats and humans, and so was eager to begin human trials - on Harley.

Mister Freeze relayed this to Harley's crew after unfreezing them, saying that Harley is a human woman and thus the most ideal test subject. His goons brought her out, and although she defeated them, Mister Freeze was in complete control as he froze her feet at knocked her out with her own bat, then encasing her in ice for the human trials. Harley begged him to stop in exchange for saving his wife, and although he was suspicious that she'd only do so to save her own skin, Harley quickly changed tact and said she won't save his wife if he didn't want her to. He then panicked, telling her to relax and that "this is a negotiation", asking her how she would perform the miracle. She offered to have Dr. Isley find the cure in exchange for her release, which he readily agreed to, inviting them as guests in his home while they await Poison Ivy's arrival.

A good host, Mister Freeze provided his guests with a feast while they waited, although he took precautions against treachery by freezing their lower bodies to the chairs at his table. He watched them eat in envy since he cannot eat cooked meat lest it increases his body temperature and kill him. He asked them to describe the mouthfeel of their steak, startling everyone present and increasing their unease even more when he fed his wife through a hole in her block of ice. Unable to talk to her for so long, he had a habit of acting as if she was present and able to speak, but when she did not (in response to King Shark's question about how they met) since she cannot talk from the ice, be decided to tell the story of their meeting himself.

Apparently, Mister Freeze was the CEO of a multinational corporation tasked with crushing the competition posed by a mom-and-pop cryogenics lab run by Nora. At the same time as they were in conflict, they both met each other online and fell in love before realizing who they were, so they decided to get married. Harley interpreted this as a "big swinging dick coming in to ruin a woman's livelihood". Although King Shark called her a "grinch," she tried to excuse her along with Doctor Psycho; Mister Freeze aloofly suggested that her cynicism comes from having never experienced actual love. In response, she angrily ranted about all that she did for her love with the Joker before declaring that "love is bullshit". Mister Freeze briefly became enraged until he heard his spinach puffs finish cooking, so he excused himself.

Mister Freeze returned with spinach puffs for his guests only to find that they had freed themselves and taken his freeze ray. He watches in abject terror as Harley goes on an angry female empowerment rant and incorrectly assumes that he froze his wife to prevent her from getting away from him. He tried to reason with her, but she was beyond reason and unfroze his wife while he screamed in horror. He caught his wife, who assumed that he had a cure, as there would be no other reason to free her otherwise until her blood disease symptoms come upon her and her hope dies.

Betrayed by his guests and no longer in an agreeable mood, Mister Freeze angrily declares that Harley Quinn condemned Nora to death and that if Ivy could not cure her, he would blow himself up and kill them all. When Ivy arrived, Harley excused the whole situation as one of revenge given that Mister Freeze wanted to kill her, at which point Mister Freeze angrily explained that he was, in fact, the only reason she survived at all, having convinced the Injustice League to freeze rather than kill her - and Harley repaid him by endangering his wife.

Mister Freeze
No, it must be my sacrifice. The only reason I've suffered through life in this godforsaken cryo-suit, is to find a cure for Nora. If that time has come, then I greet my end with open arms.
Harley Quinn
Holy shit, that's insane.
Mister Freeze
It is not insane, for if you truly love someone, you will do anything for them.
— Mister Freeze sacrifices himself for his wife

Mister Freeze is completely willing to sacrifice himself for his wife, saying that it is what anyone who loved another would do. He transmutes his blood, does the blood transfusion, and saves his wife. Before he dies, he reaches out to his wife but weakens and fades just before he can touch her. His wife then starts sobbing as she hugs his corpse.

Freeze is utterly devoted to the survival of his wife from a rare and terminal blood disease. As such, he is willing to take any measure to ensure she lives, ranging from suspending Nora in cryogenic hibernation and becoming a criminal to fund his research towards finding a cure for her. He was even willing to forcefully use a living human subject to find the cure, even if the chances were that the subject would likely die. Despite this obsession, Freeze has an otherwise cheerful outlook on life. He enjoys cooking and having casual conversations, as demonstrated when he held Harley Quinn and her crew prisoners at Arkham. Because his medical condition prevents him from eating animal-based foods, Freeze kindly asks people to describe the taste of their meal. Ultimately, Freeze's commitment towards his wife proved to be genuine devotion and affection, given that he willingly sacrificed his own life so that she could live once the opportunity became the single viable option.

Unlike the majority of supervillains and criminals, Freeze is not foul-mouthed, crass, or misogynistic. He considers swearing to be a sign of lacking in intelligence and was opposed to the Injustice League's initial idea to simply kill Harley, opting instead to have her frozen as a safer, less humiliating alternative.

❝ My beautiful girl. Goodbye, my love. Have the life I could never give you. ❞
— Mister Freeze's final words 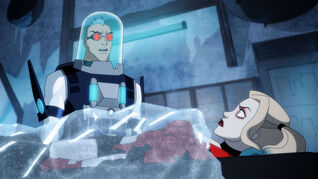 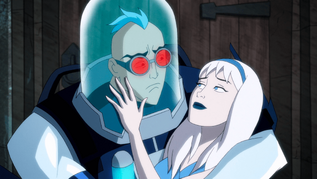 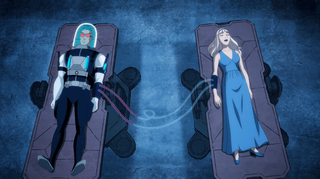 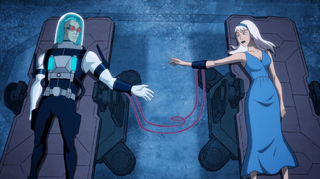 "I will never stop loving you" 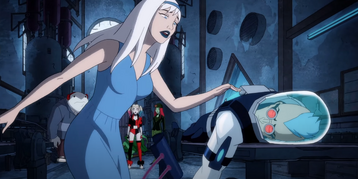 Mr Freeze dies fulfilled as he completes his quest to save his wife. 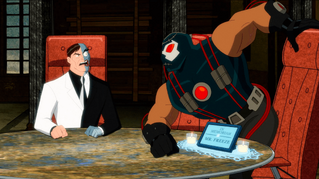 Mister Freeze is still respected even after his death
Community content is available under CC-BY-SA unless otherwise noted.
Advertisement