"The Zoobilee Zoo"
"The Nose Knows"

While Ivy starts reflecting on what’s been happening these last few months after leaving Kite Man at the altar and joining Harley Quinn for a de facto, impromptu honeymoon across the DCU, new villain Mephitic makes himself known to Harley and Ivy at the Black Cat Lounge.[3]

After skunking Harley and Ivy, Vixen calls in Cyborg and Zatanna to help recover the animals while Ivy and Harley make their escape after Ivy convinces Harley not to kill Vixen.

Harley and Ivy arrive at the hotel with the cleaning needs to get the skunk stink off. While Harley is talking about going on the town, Ivy decides they need to leave town tonight to avoid further trouble. The two take a bath to clean themselves while Ivy admits to wanting to leave town. Harley is upset by this seeing as how there is only one CEO left and even quotes the Queen of Fables with "You have to end the bloodline".

Harley finally snaps at Ivy bringing up the various times Ivy yelled at her during the trip and even that day when Ivy ignored her for most of the day. Ivy tries to get Harley to drop it but Harley only gets angrier and calls Ivy out again on being rude to her and stating she could have stayed with The Joker for the treatment she got. Harley admits to loving Ivy but says she can't be with Ivy when she's like this and leaves the bathroom.

Ivy takes the time to reflect on her relationship with Harley and her past and her reluctance to allow Harley into her soul. She comes to the conclusion that she can't lose Harley and she can't ignore her feelings anymore. She goes to talk to Harley admitting that Harley was right and apologizing but Harley was gone leaving a note that said that while Harley loves Ivy she wants Ivy to be ok and open up to someone, even if it's not her.

Harley goes to the Black Cat Lounge and after the Bouncer makes her wait in line she kick to guys off a table and gets a dance from a dancer named Peaches. During this she laments Ivy not being with her and decides to go home to Ivy and try to work things out with her. Before she can leave a group of bouncers lead by the Bouncer that made Harley wait try to prevent her from leaving. She easily beats the group before encountering Mephitic who uses his gas to knock out Harley and the other people in the club.

Ivy dolls herself up to find Harley and has an encounter with Harleen who tries to talk about her past, but Ivy refuses and walks off. When she gets to the Lounge she finds people recovering and Peaches tells her that Mephitic took Harley. This causes Ivy to retreat into her head where she sees the bodies of those she hurt like Catwoman, Kiteman, Nightfall, Livewire, and Harley. Ivy admits to her fear, that she's just like her father, uncaring and hurting those close.

Harleen shows up and says she's not like him and offers to help her, Ivy accepts and she finds herself at her childhood home and with Frank the Plant. The trio enter to that point in her life where she changed for the worst with her father scolding younger Ivy for not having friends. Older Ivy yells at him telling younger Ivy that she will have friends and even a special friend who loves her regardless of the mistakes she's made. Ivy's father turns into a demonic face that older Ivy and Frank defeat.

After the fight, Harleen says she completed the first step and tells her to go get Harley. Ivy snaps back to the real world where Peaches shows her a video of Mephitic saying that if Ivy doesn't find and fight him in less than two hours he will kill Harley. Ivy leaves to get Vixen so she can find Mephitic and Harley. 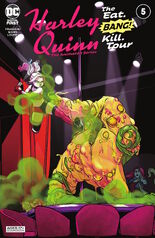 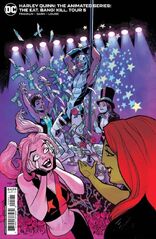 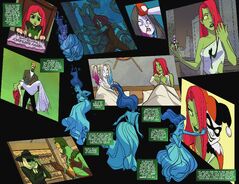 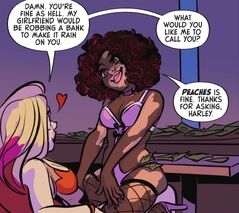 Harley fighting the goons at the strip club 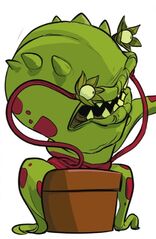 Vision of Frank the Plant 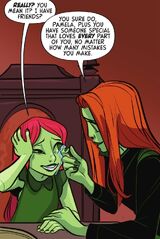 Ivy meets her past self

Ivy and Frank fight the vision of Ivy's father