After being called out by a new villain known as Mephitic, a toxic sludge aiming to stink up the joint, Ivy and Harley head to Detroit to take matters into their own hands. But Vixen isn’t having all this chaos in her city, and she’s ready to clean up the place…[4]

Harley and Ivy laze about in their hotel suite. On TV, Tawny Young reports about a new villain terrorizong Detroit. Mephitic, self-proclaimed "worst villain", calls out Ivy on TV. He defeats Zatanna and Cyborg, and leaves before Vixen can get to him. Harley and Ivy head off to Detroit.

Modelling for a fashion show, Vixen is interrupted by a call from Batman who warns her of Ivy and Harley's arrival; he fears they might want to associate with Mephitic.

Harley and Ivy break in Nightfall's place, despite Ivy's reservations. In the morning, Harley is confronted to Livewire, Nightfall's girlfriend. After talks of break ups, arrest following Ivy's wedding and lack of forgiveness, Livewire throws them out.

Ivy has a hard time with it, and takes it out on Harley, who is confused and breaks in apologies. She eventually ends her silent treatment when Harley informs her of the location of several polluting CEOs, whom they end up poisoning with extreme prejudice.

On their way to the last CEO, they are stopped by Vixen, who doesn't have any love lost for these men, but doesn't condone murder either.

After a fight, Ivy tries to manipulate Vixen with her hormones which apparently doesn't work. Moments later, a stampede of wild animals rush in, due to the combination of the pheromones and Vixen's animal powers. Vixen call upon her skunk spirit, flooding the area with stinking spray, with Ivy and Harley escaping after being thoroughly dosed.

Their adventures are related on TV, with Gordon watching and finding out their location. 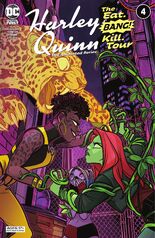 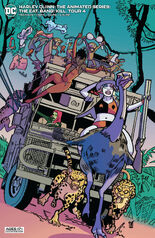 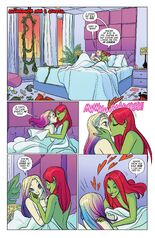 Only page drawn by Max Sarin 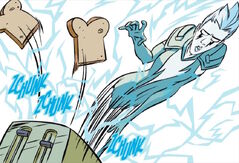 Livewire appears out of a toaster 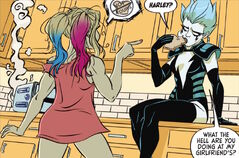 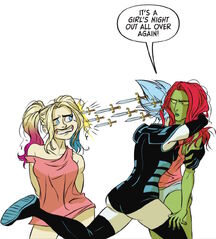 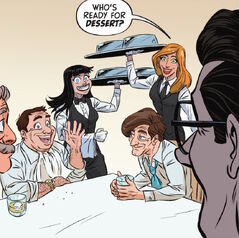 Harley and Ivy in their disguises 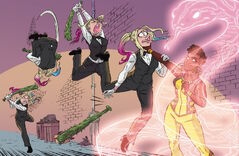