Mary Holland
Jennifer is Poison Ivy's old childhood friend who attended her bachelorette party and wedding in the second season and is a member of the Cobb Squad.

Jennifer is a pale white woman with long dark-brown hair and grey eyes. She wears light blue jeans shorts and white shoes and is usually seen wearing a light pink T-shirt with dark-pink cuffs and the text "Rosé all day" written in a thin font and matching the cuffs' color. She later swaps the pink shirt for a black T-shirt with dark-pink cuffs and "I'm that bitch" written in a bold dark-pink font. At Ivy's wedding to Kite Man she wore a sleeveless lavender bridesmaid's dress, and a sides pulled up, braided hairdo.

Jennifer was Poison Ivy's best friend from Kindergarten. At that age they promised each other to be each others' maid of honor at their weddings.

As an adult, Jennifer lived in Michigan and worked in life insurance. She was married to a man with whom she had four children.[2]

Jennifer was present at Poison Ivy's bachelorette party at Themyscira. At the start of the trip, Jennifer was upset that Harley was Ivy's maid of honor instead of her, breaking their promise from kindergarten. She also continuously asked Harley to stop calling her 'Jen'. The highlight of the trip came when they went to Hedonikka, a neighboring island that seemingly mostly consisted of a male strip-club. Jennifer was delighted by Ares performance, exclaiming how this was the best night of her life.

When Harley presented her plan to kill Eris, who had taken over Themyscira from the amazons, Jennifer was initially reluctant after discovering that the mimosas weren't bottomless she was completely on board and helped attack the amazons and even threw Eris off a balcony as revenge for the mimosas. That night, Queen Hippolyta threw a party for "The Cobb Squad", at which Jennifer got drunk with Catwoman. By the end of the trip, she was reunited with her husband and with her new-found confidence, told him she was going by 'Jen' now.

At Poison Ivy and Kite Man's wedding, Jennifer was being photographed along with the other bridesmaids but was annoyed at Harley's presence after Ivy's infidelity with her was revealed. Although, she assured them all she just wanted to support Ivy and Jennifer helped her get into Catwoman's unused bridesmaid dress. She was mad when Harley ran off before she could braid Jen's hair, which she had promised to do.

At the ceremony, Jennifer noticed Harley sneaking back into the venue after being asked to leave and tried to stop her from getting through, calling her a "home-wrecker" and hitting Harley in the face, making her fall to the ground where she caught sight of one the the undercover GCPD officers who had infiltrated the wedding. Soon after, Jim Gordon put his plan into action and Jennifer was knocked out by the gas along with all the other guests. It is unknown what happened to Jen after Harley stopped the police officers and the ceremony turned to chaos as the villains started attacking the GCPD. 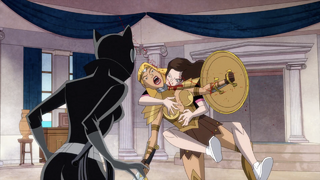 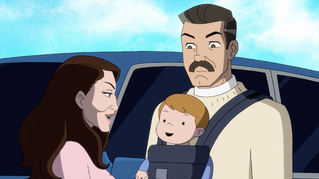 Jennifer with her family