The Injustice League was a group of supervillains who banded together to take advantage of the chaos in Gotham caused by the Joker's man-made earthquake that devastated the city.

With Gotham in chaos, The Justice League trapped inside Queen of Fable's Book and Batman disappearance, Two-Face, Penguin, Bane and Riddler continued to cause even more chaos with the usually crime spree, until Harley convinced their goons and henchmen to stand up for themselves and be their own villain, causing the others to regroup Penguin's Casino. They hold a meeting to figure out how to restore order to the Supervillain/Goons structure and Criminal Underworld.

Later at the courthouse, the villains invited Harley to reveal that they have formed The Injustice League to rebuilt what Harley destroyed. They then revealed that they will divide and take a different part of Gotham as their territory, with Harley getting a small island as her territory. However, when Harley refuses the idea, Mister Freeze decides to freeze her in a block of ice as they start with the plan. 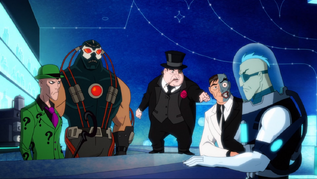 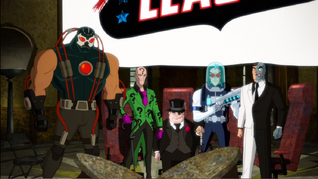 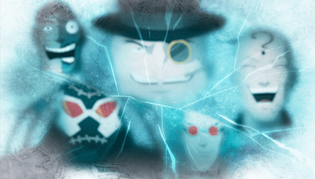