This article is about the episode, you may be looking for the location.

Harley must rescue Ivy from the clutches of Scarecrow, who's trying to harvest her pheromones to make a super toxin that turns plants into sentient monsters.

Poison Ivy wakes up as she is being rolled in for surgery, and quickly dispatches the guards around her. She reaches the exit, only to end up being captured again by Scarecrow. Harley is nearby trying to break her out, but the guards are so numerous that Frank the Plant advises her to seek out her old crew's help.

She finds Clayface working for an aggravated Riddler, who wants Clayface gone due to Clayface giving him line readings live on air. She also finds Doctor Psycho, who was working for a couple as a psychic to reveal that the husband Daniel was being unfaithful to his wife Cheryl with his secretary Denise, and King Shark, who was working for Denise herself to help her hack into her boss' accounts. Although she pleads for each of them to rejoin her, they all reject her until Frank points out that Ivy has been kidnapped and needs help. After berating Harley for not putting her "thesis statement at the motherfucking top" and getting to the point first, Frank convinces the rest of the crew to rejoin Harley briefly in order to save Ivy - although they note that they are only doing so for Ivy's sake.

Sy Borgman tags along as a driver, and they all head back to the "PlanetWide Pavers" factory where Ivy is held captive. They gain admittance when Gus, a "goon", buys their story about being there to deliver pretzel-wrapped wieners. They then steal some uniforms and infiltrate the facility, but unfortunately, Scarecrow is just now finishing harvesting Ivy's pheromones and has completed a new toxin to create plant monsters whenever it is exposed to water. He also creates a special fear-toxin infused with her DNA to bypass her natural immunity to poisons, which drives her into a state of terror that would eventually cause permanent brain damage.

Harley and company find Ivy by the sound of her screams, and Doctor Psycho reports the damaging brain effects of the toxin. Psycho takes them inside Ivy's brain to resolve the damage, while Sy Borgman stays behind to protect their bodies. Inside, they discover Ivy's mind plagued with her greatest fears, including a wood chipper that chases after them. Psycho tosses Clayface into the wood chipper and, being made of clay, his body clogs and breaks down the wood chipper. Clayface then reforms, and they continue on to find Ivy's greatest fear, which, when destroyed, would stabilize Ivy's mind again - at least according to a mental version of Frank the Plant.

They eventually stumble upon a younger version of Ivy sitting alone in her mansion on her birthday, with her father taunting her lack of friends. Harley presumes her father ("oh, we've all got daddy issues") to be Ivy's biggest fear, and attempts to attack him. However, he simply laughs and transforms into a giant mouth which tries to eat Ivy, who screams "you let me die" as she is consumed. Ivy's father tries to eat Harley as well, only for King Shark to bite a chunk out of his tongue, prompting him to spew Harley and King Shark back out into Ivy's mind in a spray of blood and pain.

Harley tries to figure out a way back into the mansion to defeat Ivy's father, but Frank, who originally sent them into the mansion, claims that Ivy's father is not her biggest fear after all. Frank laughs maniacally and then disappears as Kite Man steps forward, but reappears to smack Clayface when he guesses that Kite Man is Ivy's greatest fear, urging everyone to "can it with the commentary and just let this shit play out". Kite Man claims he tried to stop "him", but that "he's too powerful". Kite Man then tries to fly away, only for a fireball to catch him mid-air and reduce him to a pile of ashes. Death himself then emerges from the mists of Ivy's mind, and launches another fireball at everyone.

In the real world, Sy keeps falling asleep while guarding everyone's bodies and eventually falls on an alarm in his sleep, prompting a series of guards to storm the room. Meanwhile, everyone in Ivy's mind keeps frantically dodging death's fireballs. Psycho even tries to block a fireball with a telepathically lifted boulder, but the fireball disintegrates it, so he just says, "Okay, he's burning rocks. I'm out."

Clayface then reforms into a bat, which Harley uses to club death to death. However, when Harley pulls death's hood off, she sees her own horribly battered face - Harley herself is Ivy's greatest fear. Before they can reminisce on it too much, however, Ivy's mind abruptly corrects itself and ejects everyone from it, her greatest fear having been defeated. Everyone wakes up surrounded by a mass of bloody gore from a half dozen corpses, Sy having personally, horrifically killed all of the guards with various mechanical appendages.

Harley demands to know why Ivy fears her, but she brushes it off due to the impending doom of Gotham. They discover that the Legion of Doom was behind Ivy's kidnapping, and they rush to prevent Scarecrow from leaving with Ivy's pheromones, but they arrive just as Scarecrow and his soldiers exit the facility. Their own truck ends up getting towed, so Sy Borgman literally transforms into a car, revealing that he was turned into a "transchanger" by the CIA in 1984. Only his face is still human, placed at the front of the car, allowing him to talk.

Harley and company catch up to Scarecrow's trucks just at the entrance to Harley Quinn Highway. It turns out that Gotham City let Harley design it when she threatened to nuke the city, and she created a Mario Kart-esque track that went above the city and included several loop-the-loops, jumps, and even a massive statue of Harley Quinn herself, which the end of the highway wrapped around. While chasing the trucks Ivy manages to take one over with plants, and Harley keeps demanding to know why Ivy fears her. In the middle of a fight Ivy relays that she fears Harley because she does not want to trust someone only for them to let her down, as Harley did, and Ivy claims that Harley still only lives based on what the Joker thinks of her.

The truck Harley is on then slows before Harley can question Ivy on how to resolve the rift in their friendship, slowing to such a degree that when it hits a loop-the-loop, the truck surrenders to gravity at its peak and falls off the track. That truck explodes on impact while Harley maneuvers through the air to land inside Clayface, both unharmed in Sy Borgman's car. On the road, Ivy jumps off the truck she controlled, allowing it to be shoved off the road and explode against a nearby building while she lands on the penultimate truck.

Held back by gunfire from the drivers, Ivy uses a leaf in the window to slit both driver's throats. Unfortunately, a turn came up right then, and her truck flies off the highway, prompting Sy Borgman to drive off his part of the highway and intercept her in the air, with Harley pulling Ivy safely into the car just before Sy lands on another portion of the highway and comes to a stop dangling over the edge of the road. Impressed, Harley assures Sy that he will be in the crew even if it was just him and her, and although he falls asleep again, he rouses himself and drives after the final truck - the one with Scarecrow.

Realizing that Scarecrow is taking the Gotham Park exit and that they cannot catch him before then, Harley has Sy drive beneath the Harley Quinn Highway weapons cache to pick up a rocket launcher. Harley then takes the rocket launcher and proclaims to Ivy that the "old" Harley let Ivy down and that it was "time to blow her up", at which point she shoots her own statue, causing its head to fall onto the highway, blocking Scarecrow's truck. Not to be outdone, however, he simply drives his truck off the side of the highway and into the reservoir below, mixing Ivy's pheromones with water and creating an army of plant monsters.

Meanwhile, Daniel is meeting with his secretary Denise in the park. He proclaims that he is leaving his wife Cheryl for her, but unfortunately for him, however, at that moment, the trees around them turn into monsters, and one promptly ate Denise, leaving him without a girlfriend just after he abandoned his wife. Trees all throughout the park then transform and begin attacking the populace.

Doctor Psycho as a fortune teller 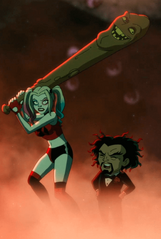 Harley uses Clayface as a bat

The crew wakes up to Sy having killed the guards 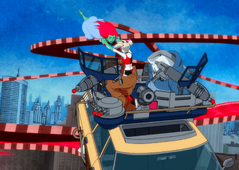 Scarecrow's bag after he drove into the reservoir