Despite taking place in the show's universe, it is not considered canon to the show as it contradicts events from the episode "A Seat at the Table".

Harley finally gets her shot at sitting on the board of the Legion of Doom - but corporate evil-doing isn’t exactly what she expected, and neither is her new boss, Lex Luthor! Written by the co-showrunner of the hit DC Universe HARLEY QUINN animated series![1]

Harley is rushing for her first day at the Legion of Doom and stops at a bakery to pick up a box of gluten-free croissants. At the Hall of Doom, Lex Luthor is telling the Legion about the email leaks which has resulted in their plans and finances being made public. Thinking about optics, Luthor asks for ideas to change the narrative. After dismissing the other members' ideas he turns to Harley although she doesn't manage to form a full sentence, leaving her embarrassed.

At the "Gym of Doom", Harley takes out her frustrations by kickboxing when Bane approaches her, sympathizing with her having a tough first day. Although she initially tells him to leave her alone, they start talking and she airs out some of her frustration with how Luthor is running things. Bane tells her that if he was the leader he would grant a lot more room for failure to create a safer space and also encourages her to assert herself as Luthor will respect her more for it.

At the next board meeting, Luthor tells them about the henchmen union strike and turns to Harley for ideas. As someone having experience as a henchman, she tells him that creating a stock-purchase plan to make them invested in the company's success and unite with them against a common enemy. However, when Luthor shuts her down, she loses it and starts smashing the tables with her mallet while telling him off, even attacking his character by calling him a narcissist with borderline personality disorder. Realizing she has gone too far, she asks if he will fire her; however, with her being their only active female member at the moment, he refrains from doing so as it would be bad for optics. 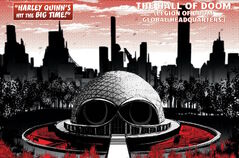 The Hall of Doom 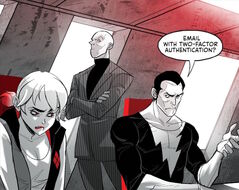 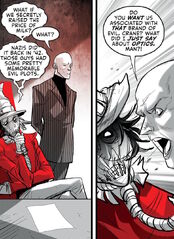 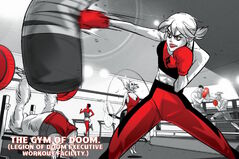 Harley in the Gym of Doom 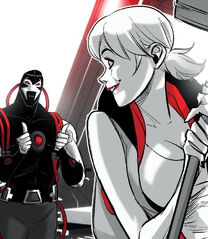