Harley's Crew is a group consisting mainly of "C-list" supervillains who Harley assembles after her breakup with the Joker.

After Harley's break up with the Joker, she was dead-set on proving herself as a supervillain and get into the Legion of Doom by forming a crew of her own. In the episode "So You Need a Crew?" she set out to find members for her crew and went to Underworld Talent Inc. to hire henchmen. However, once the consultants discover she is no longer with the Joker, they refuse to give her anything and kick her out. She then went to a seminar on villainy to get some tips from Maxie Zeus but he turned out to only be after sex. After Harley visited Queen of Fables who told the story of how she was unfairly imprisoned in a U.S. tax code book and of the double standard with male and female villains, Harley realized she shouldn't try to recruit people who believed in her but rather people no one else believed in. She starts by recruiting Doctor Psycho who has been ostracized and kicked out of the Legion of Doom for his misogyny after calling Wonder Woman and later his own wife a cunt. She also recruits Clayface, who worked as a bartender at Noonan's Bar. As the crew's first mission, they get revenge on Maxie by stealing his gold medals and beating him up, getting him to admit on live TV that "Harley Quinn's crew ain't nothing to fuck with".

In "Finding Mr. Right" Clayface recruited King Shark to help Harley find a nemesis, helping them to hack into a website. He also stuck around to help Harley prove Robin wasn't her nemesis and afterward Harley invited him into her crew, which he accepted because he liked being on a schedule. However, his constant present, caused them to be evicted from Ivy's apartment due to a "no pets" rule.

In "Being Harley Quinn" Ivy's landlord Sy Borgman found the whole crew passed out on the floor of the apartment and almost cremated them in a pizza oven at Gotham Mall, believing they were dead. Harley looked around the abandoned mall and realized it was the perfect lair for the crew. Sy agreed to let the crew have it on the condition that they would let him come along on some of their heists.

In "A Seat at the Table" Clayface, Doctor Psycho and King Shark all left the crew after Harley fell back into her relationship with the Joker, neglecting to help them get out of going on a mission with Bane and stood Ivy up. However, after getting information that Ivy has been kidnapped, she convinces them to come back, if only for this mission in order to save her during "Harley Quinn Highway". Despite this, she regains their trust and by the end of "The Final Joke" the crew is back together again.

In "New Gotham" Harley gets captured by the newly formed Injustice League as they took control of the city. After months, the crew manages to break Harley free and they go on to take down the remainder of the Injustice League.

In "Inner (Para) Demons" Psycho quit the team after Harley set out to take over the city with Darkseid's army of Parademons but gave it all up when she realized murdering thousands of people for no reason wasn't what she really wanted. In "Dye Hard, he betrayed Harley by taking control of the Parademons who were running loose in Gotham and mind-controlled Clayface and King Shark to turn them against her. In "Lovers' Quarrel, he took control of Poison Ivy and sent her to kill Harley to fulfill his deal with Darkseid, in which he promised him to rule the world if he gave him Harley's head. However, Harley managed to break Ivy out of his control and together they captured Psycho who was brought to Arkham Asylum. 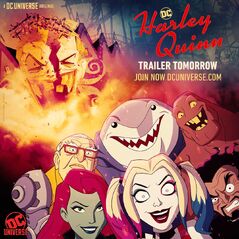 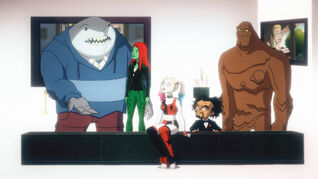 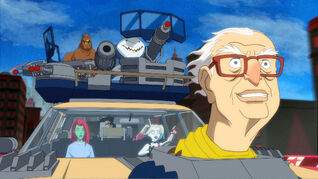