"So You Need a Crew?" (cameo; flashback)
"There's No Ivy In Team

He made a tiny cameo as part of the line-up of prominent supervillains during the 1980's in the episode "So You Need a Crew?" when Poison Ivy recounted Queen of Fables' backstory.

Firefly himself never made and appearance but his weapon, a plasma flamethrower, is shown to be a plot point for Harley Quinn to acquire it to break through Mister Freeze's ice fortress. When the city of Gotham fell after the events of "The Final Joke", Doctor Trap looted all the villain's lairs and collected many items at the Gotham Natural History Museum, including Firefly's flamethrower. During "Catwoman" Harley managed to get the flamethrower from Doctor Trap which she used to break into Mister Freeze's fortress in "Thawing Hearts".

In "There's No Ivy in Team" Firefly was attempting to burn down the Old Gotham Corn Factory when he was confronted by the Bat Family. However, their plan went awry when Nightwing made himself known earlier than planned to confront Firefly and a fight broke out. As Nightwing and Batgirl both attempted catch Firefly, swing towards him from opposite sides, they instead collided into each other, allowing Firefly to get away but not before lighting the building with enough fire to make it explode, creating a sea of popcorn. Later, the batcomputer alerted the Bat Family that Firefly was attacking an Orphanage and they headed to stop him.

In "The 83rd Annual Villy Awards" he attended the Villys and was even mentioned by the Joker in his introductory song and dance number. He could be seeing watching the awards being carried out during the evening and shared a table with Killer Croc.

See also: All images of Firefly 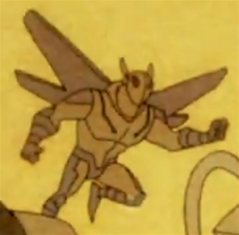 Firefly in the 80s 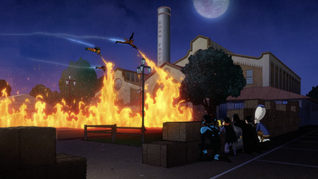 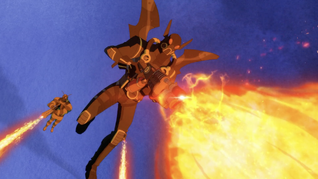