Felix Faust is minor a character in the T.V. series, Harley Quinn. He is a supervillain and a member of the Legion of Doom.

Felix is a slim Caucasian man dressed in mostly black clothes, with black leggings and sleeves, a dark grey cloak with pointed shoulders and a yellow collar, a yellow belt with a large circular buckle, and a black hood with a yellow ring around it similar to his belt. He has black eyebrows and a brown goatee that ends in a point.

In "So You Need a Crew?", when Harley Quinn went looking for henchmen to join her crew at Noonan's Bar, Felix Faust was active on a scheme which involved sending his henchman blindly through a portal, possibly to their death.

In "L.O.D.R.S.V.P.", Felix Faust attended the Legion of Doom's prospective member night when Harley Quinn was nominated to join, going up against KGBeast. In the following episode he applauded as Harley and her crew were officially welcomed into the Legion of Doom.

In "Something Borrowed, Something Green" he attended Poison Ivy and Kite Man's wedding at the Old Gotham Corn Factory and helped fight off the GCPD officers when they hijacked the ceremony by opening portals to hell for them to fall through.

Similarly to the Joker, Felix has virtually no regard for his henchmen, disposing of them like garbage, sending them into portals to Hell, and, when one henchman questions whether or not he has to die in the portal, he tells him to just jump, and the man is heard screaming that he is dying once he jumps in. 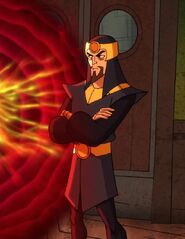 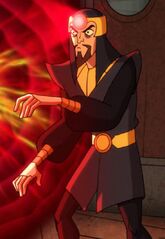