Sane Me (by Harley Quinn)

Doctor Quinzel (also known as Harleen by Harley Quinn to distinguish her and her former self) is one of the supporting characters of the series. She is a apparition that appears to Harley Quinn whenever she needs some advice acting as a sort of conscience to the supervillain.

Doctor Quinzel's appearance is pretty much the same as Harley's. She wears a red shirt and a black skirt with a white coat. Her skin tone is normal. She also wears glasses and is normally seen holding a medical note board.

Main article: Til Death Do Us Part

She first appeared after Poison Ivy showed her a picture of them in the past, saying Harleen Quinzel was the only doctor to ever get through to her, questioning what Harley thought she would say to her regarding her relationship with the Joker. The picture started talking to Harley, asking her for help diagnosing a patient of hers who is fixated on a murderous psychopath and won't end their relationship no matter how terribly he treats her. Harley easily diagnosed it as "classic abusive co-dependency" and quickly realized she was describing her own relationship with the Joker.

She appeared again after Harley had gotten back with Joker, only for him to betray her, letting her be dropped in a pool of acid (later revealed to just be margarita mix). In the acid, Harley has a mental flashback to the Joker romantically proposing, but Doctor Quinzel shows up and makes her realize that wasn't really what happened and the that "proposal" Joker gave her was actually a suicide bomb plan to kill Batman, only for him to save Harley in the process.

She later appeared again in a cellphone after Harley sent a text towards Ivy and never got a response and mocked her usage of "LOL". After opening up about being abondened by her crew, Doctor Quinzel told Harley that there's one person who still loves no matter what she does or who she is, which Harley thought she meant Ivy but what she really means her mother.

She appeared again, this time in a car mirror where she learned what happened to Harley after discovering that her parents were trying to kill her for a million-dollar bounty, which she tries to explain that she had no idea that they would do that to their own daughter.

Much like Harley before she went insane, Dr. Quinzel talks in a very professional and friendly tone; she is willing to help her patients with their issues. She is very aware of the fact that she is merely an apparition of Harley and able to distinguish what Harley sees is real or not. 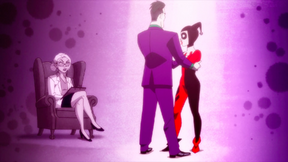 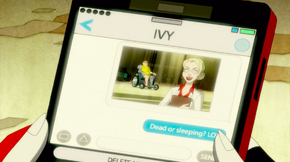 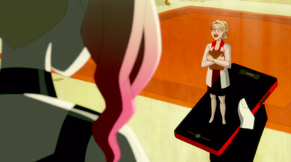