Cheryl is a recurring character on the T.V. series Harley Quinn. She is a police officer at the Gotham City Police Department.

As seen in "All the Best Inmates Have Daddy Issues" Cheryl used to work as a guard at Arkham Asylum during the time Doctor Harleen Quinzel was the Joker's psychiatrist. On her first day, Harleen asked Cheryl to let her into the Joker's cell to get on his level which she allowed although noting it was "your funeral, sug".

Cheryl would at some point start working for Commissioner James Gordon as a police officer at the Gotham City Police Department.

Cheryl was first introduced in "Devil's Snare" as part of Jim Gordon's troop which he led to fight the Joker's take-over of Gotham. They drove in the tank which was eventually hijacked by Harley Quinn and her crew who left the officers all tied up to steal the tank for themselves.

In "New Gotham" after the city was thrown into complete chaos and taken over by the Injustice League, Cheryl, along with her fellow officers betrayed Gordon and joined Bane.

In "There's No Place to Go But Down", she is put to guard Harley in The Pit, but not before being fueled with tons of venom to enlarge her size. Despite her now large muscles, Harley manages to break her arm over a chair, causing her to faint.

She heals from this and later rejoins the police force, helping Gordon infiltrate Poison Ivy and Kite Man's wedding during "Something Borrowed, Something Green" in order to capture all the supervillains on the guest list. However, the plan, backfired as Harley figured out the plan and stopped Gordon, causing all the enraged villains to turn against the police. Cheryl was last seen being chased by Killer Croc.

See also: All images of Cheryl 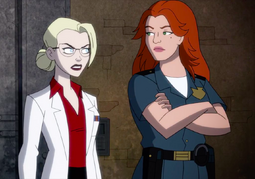 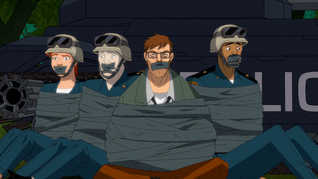 The GCPD are captured when Harley Quinn steals their tank 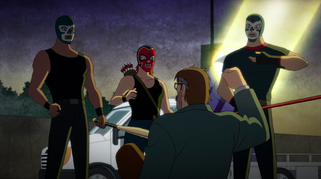 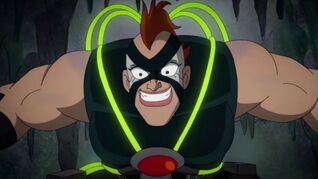 Cheryl after being injected with venom
Community content is available under CC-BY-SA unless otherwise noted.
Advertisement