This article is about the character, you may be looking for the episode.

Sanaa Lathan
Catwoman is a recurring character on the T.V. series, Harley Quinn. She is an old friend of Poison Ivy and a member of the Cobb Squad.

❝ 'Fun Amazon thingie'? You know she screwed me over on that! ❞
— Poison Ivy

Selina Kyle is half Cuban and half Italian. During a previous mission with Poison Ivy in the Amazon Rain forest to take down loggers, Catwoman abandoned Ivy to steal a blood diamond and left Ivy to pay for all of her hotel bills, including multiple spa treatments.

It is unknown how or when the two met but Catwoman's relationship with Ivy pre-dates Ivy's friendship with Harley Quinn.[1]

❝ The plan is, I handle the traps, you follow me. ❞
— Catwoman

Selina met with Harley Quinn and Poison Ivy at Chéz Féline to discuss stealing Firefly's flamethrower from Doctor Trap who set up shop in the Gotham Natural History Museum, and while there ordered the trio Cobb salads, much to Poison Ivy's contempt. Selina agreed to the heist on the terms that she would steal an Egyptian ruby for herself.

During the night of the heist, Selina intentionally showed up late as a "power move". After arriving, Catwoman told Harley and Ivy to follow her and that she would handle the traps. She used her claws to cut into the museum's atrium. Selina and Ivy ended up on their own, and during the heist, Selina had to save Ivy from multiple traps, all the while discussing Ivy's relationship with Kite Man and expressing her disdain for it. After they arrived at the flamethrower's exhibit, the pair met up with Harley Quinn and Kite Man, who also arrived at the same time. Selina kept her end of the bargain and cut a hole in the exhibit so that Harley could take the flamethrower, but stole the diamond Kite Man wanted to use to propose to Ivy, and fled.

Catwoman agreed to attend Harley's bachelorette party but took an Ambien just as the plane took off so that she could "cat nap" through most of the weekend. Later on, Catwoman easily deduced that Harley and Ivy "hooked up" but offered Harley no real support, only mocked her insecurities as she continued to lie to herself that her feelings didn't mean anything. The next day, Catwoman became bored with small talk and made to leave, only for Harley to snap and toss her (she hissed as she went) back among the bridesmaids, browbeating them all into at least pretending to have a good time for Ivy's sake, which Catwoman begrudgingly (and sarcastically) complied with.

At dinner that night, Catwoman sarcastically claimed to like her vegan apple pate and that she most definitely did not miss the meat. They then went to Hedonikka, where Catwoman amused herself by picking Maxie Zeus' pocket until a drunken Ivy wrapped her arms around her. Catwoman extricated herself and left at her earliest opportunity. The next day, Catwoman knew that Harley and Ivy had had sex, but again refused to be of any help to Harley, telling her to seek help from a hungover Jennifer. Eventually Harley laid out her plan to kill Eris and free Themyscira, finally giving Catwoman something to do. She lent her considerable combat prowess to fighting off the Amazons protecting Eris, using her whip to knock Lex Luthor's documents aside before Queen Hippolyta could sign them. Later, when the Amazons through a party in their honor for freeing them, Catwoman got thoroughly wasted with Jennifer, and went home after the weekend ended.

Catwoman attended Ivy and Kite Man's wedding as a bridesmaid, with Tim Burton as her date to the wedding. At the photo shoot with the rest of the bridesmaids, Catwoman casually accused Harley of bailing on Ivy. Although Harley fired back that Catwoman wasn't even a bridesmaid, Catwoman assured her that she was and fulfilled all the responsibilities - just not wearing the bridesmaid dress portion of them. When Harley asked to wear her discarded dress, she laughed and asked "which 10 pounds do you plan on leaving behind?"

Despite her teasing, Catwoman did relent and allow Harley to wear her discarded dress, and sat licking herself while Harley struggled to fit inside. She later attended the wedding ceremony as a proper bridesmaid, but when the ceremony came under gaseous assault by the GCPD, Catwoman rushed to her Tim Burton's side to escort him from the area. She briefly succumbed to the gas until Harley let it out through a hole in the roof, so she once again finished escorting Burton to safety, saying that Clayface is "creeping me out".

Being on the run from Commissioner Gordon after the wedding fiasco, Harley and Ivy turn up at Catwoman's place to seek refuge and ask her to look after Harley's hyenas, Bud and Lou. However, Selina is not happy to see them and especially worries of the safety of her cats from the hyenas although Harley insists that they are vegetarians. She lets them in but gets annoyed at Harley for disrespecting her place.

Selina takes Ivy aside to ask her what is going on with her and agrees to watch Bud and Lou for them but their conversations is soon interrupted by Gordon and his police force surrounding the place and soon throws a grenade. While Catwoman gathers her things before escaping, Harley and Ivy warns her that Batman has arrived as well. Selina sends her cats away with Harley and Ivy on the escaping vine that Ivy has created. She then turns to find Batman in her apartment. They share some flirty banter before she uses her whip to swing out of the window and escape.

❝ See, she always does this, she orders for everyone. So controlling. ❞
— Poison Ivy[2]

Selina is a confident and self-assured woman who often uses her charm to win people over. Poison Ivy has described her as manipulative and controlling, as she had bailed on Ivy once before and made her pay for her bills, as well as ordering for the table when meeting with Harley and Ivy. During their meeting, Selina interrupted Harley and proposed stealing an Egyptian ruby that she wanted, demonstrating a more selfish and self-absorbed side to her.

See also: All images of Catwoman 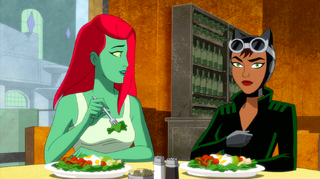 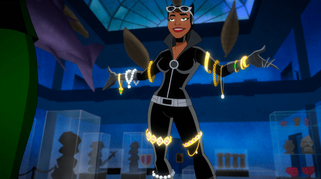 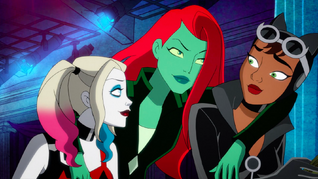