One of them could be seen inside Harley's mind in the episode "Being Harley Quinn" although it's unknown which one of them.

They made their first full appearance in the season 2 premiere "New Gotham" in which they are seen pulling on Harley Quinn's sleigh in the opening scene. Once she arrives at their hideout she tosses them a steak which they start fighting over until she pulls out second one so they get one each. They were seen again in "Catwoman" being fed bone-shaped biscuits by Doctor Psycho.

After deciding to go on a road trip to escape Commissioner Gordon with Poison Ivy in "Journey to Love", Harley went to fetch Bud and Lou and packing bags for each of them before returning to the car and all driving off together. As seen in "Journey to Love Part 2", Harley then brings them to Catwoman in hopes of having her watch them while she and Ivy goes away on their trip.

See also: All images of Bud and Lou 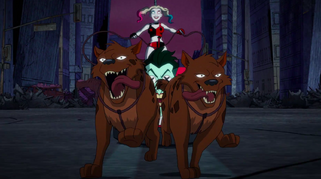 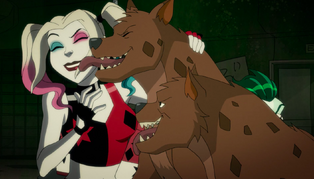 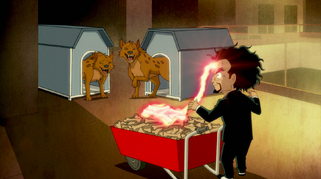