Justina Machado
Bethany (aka Beth) is a minor character from the second season of Harley Quinn and is the girlfriend of the Joker.

Bethany had two children Sofia and Benicio from a previous relationship and was a single mom working as a nurse practitioner. After the events of "The Final Joke" she found a now "sane" Joker with no memory of his criminal past in the rumble of his tower. She treated him at the hospital, resulting in the two of them falling in love. He was eventually introduced to her two children whom he quickly won over with a puppy and later came to view as his own.

Beth was first mentioned in the episode "All the Best Inmates Have Daddy Issues" when Harley Quinn and Poison Ivy discovered Joker was still alive and "normal". Bethany's children were shown in this episode when Doctor Psycho scanned Joker's brain to see if there was any traces of the old Joker left. She later sent Joker a picture of the kids covered in sauce with the caption "Sauce face :p <3!" which made the Joker laugh. She was mentioned again in "Dye Hard" when Harley ran into sane Joker again.

She first appeared in "A Fight Worth Fighting For" after Joker was turned into his old self to help Harley track down Queen of Fables' storybook in order to get back the Justice League and save New New Gotham. They went to Beth's house to retrieve the book which he had read to the children from, believing it was a normal fairy tale book. She was initially alarmed seeing Harley Quinn and the Joker outside her house but heartbroken when the Joker revealed that he was the man she had been dating all along, claiming none of it was real. Angry, she through the book over their heads to a Parademon forcing them to track it down. However, the Joker later returned, having come to the realization that what they had was true love so they reunited and shared a kiss.

See also: All images of Bethany 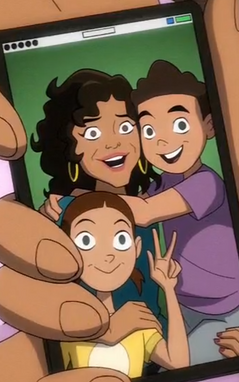 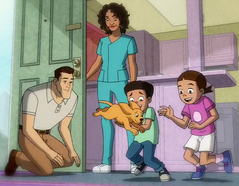 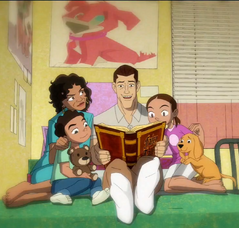