"A Seat at the Table"
"Harley Quinn Highway"

After a falling out with her crew, Harley heads back home to Bensonhurst, where her doting mother waits for her... and her deadbeat dad, who’s more dangerous than anticipated.

As Harley is "insta-stalking" her former crew, who are enjoying their unemployment at Blüdhaven Thrill Park, she is informed by Bane that he and most of the Legion of Doom are invited to Black Manta beach lair for the weekend and she didn't get an invite. Later as Harley still wonders why Ivy hasn't returned her texts, she encounters her former sane self, who helps her by telling her that there's one person left who does love her unconditionally - her own mother. Harley then went to see Sharon Quinzel in Bensonhurst, looking for solace. Harley then remembers her time with her family, her now-dead brother, and her estranged father.

In Scarecrow's lab, Ivy awakens to find herself bound and held captive by a kindergarten teacher named Gus who moonlights as a "goon" to pay for art supplies. She offers to double his pay and get him whatever supplies he wants, but he worries that releasing her would have him drop below 4 stars on "Goon Review". He then leaves to take a call from a parent, and blew a dandelion while outside, which miraculously made its way through the vents and to Ivy's room. She then animated it into a small, mobile plant, and commanded it to alert Frank the Plant about her predicament so that he could tell Harley.

While looking over her old trophies in her room in Bensonhurst, Harley remembered being a stellar gymnast and nearly winning a national championship. However, her dad Nick Quinzel owed a great deal of money to the mob, and as she was the favorite, he bet heavily against her. If she lost, he would win enough money to pay off his debts and keep "all nine" of his fingers. She eventually failed on purpose and lost, but when her dad thanked her and said there'd never be a woman president, Harley snapped and attacked him in front of everyone. Back in the present, Harley notes that it was one of the worst moments of her life and that she is glad he is still in prison, only for Nick to suddenly arrive in her room, free, much to her anger.

Harley calls Nick a "piece of shit" at the dinner table, prompting him to beg her to give him a second chance. He claims to have not gone to prison over gambling, and ostensibly never made a bet since, but Harley accuses him of buying a TransAm with the excess money from his winnings, calls him a rat, and claims to only want to be around people who actually love her. Nick profusely apologies and begs for forgiveness, and when Harley refuses, he requests that they at least have a nice dinner for grandma's sake. She claims to be very happy to see Harley and says that she now has brain cancer, at which point her face explodes. Nick exclaims that it's an "aggressive form of brain cancer", but Harley identifies it as a bullet from a sniper and covers the windows.

This forces the sniper to physically enter the house, only to find Harley and Sharon covered in "blood" and seemingly dead. Harley is actually alive and quickly shoves the assassin's own knife into his gut, demanding he reports who he is working for. Before he can answer, however, Nick kills him, saying that it was because he killed grandma and that it was "God's trigger to pull". He claims that the mob was there to kill him, not Harley because he supposedly owes them a great deal of money. He goes to talk to them, claiming them to be "reasonable".

Harley insists on tagging along because "when you fuck this up, they'll kill ma next". At an Italian restaurant, they find the mob and kill them, Nick giving Harley gymnastics commands from his vantage point to help her kill them all. At the end of it, he apologizes for making her lose, citing her perfect routine, and they hug. However, the chef interrupts them with a minigun, so Nick shoves Harley down under cover, losing his last thumb to a bullet in the process. Meanwhile, Frank the Plant wakes up in the middle of Mexico after his weed dealer just stole hallucinogenic honey from a cartel. After licking it twice, the dealer passes out, so Frank takes the wheel and drives back to Brooklyn to contact Harley.

At Scarecrow's factory, Gus the kindergarten teacher sends off an angry text to Harley Quinn to break off their relationship, claiming that's what must be done in toxic friendships and refusing to let Ivy text for fear of calling for help. When Harley receives the text she decides to stay a little longer with her reconciled family. Her grandfather even shows up, celebrating Harley being in town and grandma's death but noting that he has unusually high blood pressure. At that moment his chest explodes outward, and this time Nick exclaims "that blood pressure's no joke!" before realizing it was yet another bullet and assassin. Harley throws a fork into this assassin's eye, flips her over the dinner table, and stabs her in the gut.

Angry, Harley declares that she will protect her family from the mob at any cost, only for a bullet to shoot through her own stomach. Nick is revealed to be the shooter, who explains that he couldn't bring himself to kill her and collect the bounty on her head and so tipped off several assassins to collect a finder's fee. However, having defeated both assassins, Nick was forced to take matters into his own hands, and even Sharon pulled a knife on Harley. Sharon claimed that when Harleen became Harley Quinn, they became a laughing stock and that all she ever wanted was for Harley to marry a doctor, but instead, she became one herself and turned into a supervillain.

Even with a gut wound, they continue to argue and physically fight throughout the house, with Nick claiming that he is just a criminal like her and that he betrayed her like she betrayed her crew. Harley denies the case of "samesies" because her crew left her, which Sharon said was because Harley was "suckin' face with that goyische clown". Sharon even goes so far as to say Harley has bad taste in men, which Harley argues she got from Sharon, as evidenced by Nick. Speaking of Nick, at this point, he slams Harley into a gift wrapping station and attempts to strangle his own daughter until she pulls a box cutter and holds him at bay with it pressed against his throat. Sharon and Nick then beg Harley not to kill Nick, saying they are family after all.

In a tired rage, Harley says they aren't her family, that they aren't even worth it, so she throws the knife into a stair post and stumbles out of the house. Covered in bruises, cuts, and a gunshot wound through the gut, she collapses just outside the house as Frank rolls up in his dealer's car. She then passes out, but Frank takes her in and tends her wounds. Harley's inner sanity then talks to Harley when she wakes, claiming to have been completely unable to predict that her own family would try to kill her over a bounty - a bounty set by an unknown person. Harley laments that Ivy doesn't care about her, but Frank says Ivy needs Harley, that Ivy has been captured and is in serious danger.

Scarecrow later arrives to sedate Ivy in preparation for the harvesting of her organs. Meanwhile, Bane arrives to accost Joshua Cobblepot in the Legion of Doom for using Penguin's Legion corporate card to put a bounty on Harley Quinn. Joshua tries to deny it but eventually admits that he wants Harley dead for ruining his Bar Mitzvah, and Bane chastises him for using the emergency card for vape pens, candies, and a "dolphin encounter". Bane then bends the card to make it unusable, and Joshua admits he was being impulsive - Bane also notes that he canceled the bounty on Harley Quinn, too.

See also: All images from "Bensonhurst"

Bane observing Harley who is "insta-stalking" her former crew

Harley talks to Doctor Quinzel from her phone 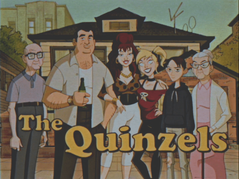 Harley's family in the past

"Your bill is all candies and vape pens and something suspiciously labelled "dolphin encounter"!"

"Already done, because I am this credit card's reckoning!"

Bane getting hit by the chair

"Blow up on the ground, you stupid office chair!"