Son of Atlan, Heir to the Throne of Atlantis

Aquaman is the alter ego of Arthur Curry, king of the underwater kingdom of Atlantis, as well as a long-standing member of the Justice League. As his name would suggest, he is most adapt while in the presence of a large body of water as he can breath underwater, swim at accelerated speeds and can telepathically communicate with marine life. Despite his prestige as a king and a member of the Justice League, several super-villains enjoy mocking him and tearing into his persona. He is the sworn enemy of Black Manta.

Eschewing the tattoos and beard of Jason Momoa, Harley Quinn offers a more classic take on Aquaman, although he does have longer hair of the modern incarnation. He is golden blond, with slightly tanned skin, wearing an orange scale-mail shirt which ends in a Mandarin collar around his neck. His hands are covered by a pair of forest-green gloves with a fin around the sides. He also sports a pair of forest-green pants held up by a golden yellow belt with a golden belt-buckle shaped as a stylized letter A.

Aquaman watched Batman's fight with Harley Quinn and Poison Ivy on the Tawny Young show on his phone while sitting on the toilet under water.

Harley and her crew stole a cache of Atlantean jewels from the Atlantis Museum of Art, with Clayface pretending to be Aquaman to misdirect the guards. However, Aquaman himself apprehended them on the ocean surface, and it required Poison Ivy's arrival and tying him up in seaweed for Harley and her crew to escape.

The encounter got the attention of the Legion of Doom which got her nominated to join the legion and invited to a party. While Harley was mingling at the party, Aquaman arrived to retrieve his jewels from Ivy and Harley. Harley sucker punched Aquaman in the throat and distracted him briefly before he kicked her aside. He then fights off all of the disarmed Legion of Doom guests with ease. Aquaman yells aloud that his quarrel is only with Harley and Ivy. At this point all of the Legion of Doom members back off except for Black Manta, Aquaman's nemesis, who puts himself in the middle and taunts Aquaman with his first name so Aquaman blasts Black Manta away with his trident.

As Aquaman prepares to blast Ivy, who was knocked out by Black Manta falling on top of her, Harley baits him into attacking her, so he throws his trident directly at her, misses, and the trident strikes the fish tank she was deliberately standing in front of. With all the fish flushed out into the room, Aquaman began picking them up in distress, angrily discarding Harley's suggestion to take them to a YMCA pool down the street because these are saltwater fish. As Aquaman leaves, the Legion of Doom applauds her for driving him off.

From what has been shown in the series, this incarnation of the character is a boisterous bruiser who doesn't have an indoor voice, given to hearty high-fives and laughing freely. As befitting a king, Aquaman will occasionally use older and more formal words such as "abscond" while referring to Harley Quinn's theft of the Atlantean royal box of jewelry. His preferred word choices and method of phrasing his sentences had lead him to self-identify as the "Dickens of the Deep". But despite his regal manner of presenting himself, Aquaman has shown a far more down-to-earth attitude while dealing with more juvenile and rude characters such as Harley Quinn, Bane and Sinestro. He was shown to get annoyed with Sinestro's backhanded comment regarding his "family jewels" and openly berated Harley for suggesting to put saltwater fish in a swimming pool filled with chlorine.

Aquaman and Black Manta appear to be fierce enemies with a history considering that they refer to each other by their first names. Unlike his arch-enemy, Aquaman does not take their rivalry as personal as Manta does, clamming that not all of their encounters centers around him alone.

See also: All images of Aquaman 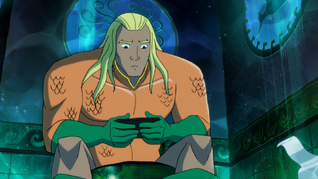 Aquaman watching the Tawny Young Show whilst sitting on the toilet. 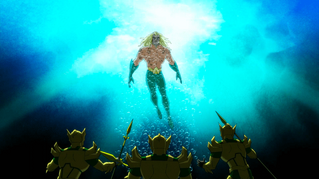 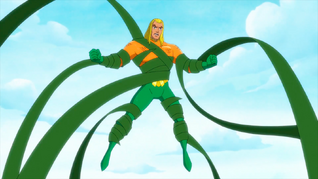 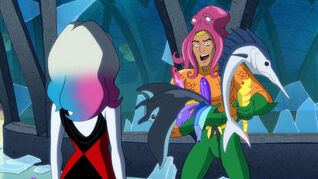 Aquaman saving the fish from the tank at the Hall of Doom, and yelling at Harley.
Community content is available under CC-BY-SA unless otherwise noted.
Advertisement