"It's a Swamp Thing"

Alfred Pennyworth is a minor character in the T.V. series Harley Quinn and is the butler and father-figure of Bruce Wayne.

When Batman was unable to fight crime, Alfred created a superhero persona known as the Macaroni to keep crime at bay. The Macaroni dresses in Victorian-era gentlemen clothes and uses a hi-tech wig that sprung out a sword and shield, including guns. He later teamed up with Batgirl to save Batman.

Alfred is a pale-skinned English man with graying hair and a black mustache. He is dressed in a black tuxedo over a purple shirt and a black necktie with black pants and shoes.

As Macaroni, he is shown to be an average size man wearing a blue cap on a large wig, and an old-fashioned British outfit of blue, red, and yellow that has a red bow-tie and beige breeches, with his face covered in white powder and a mask.

Alfred Pennyworth is born in England where he served in the navy during his youth. At some point, he came to Gotham City where for many years been he worked as the live-in Butler to the wealthy Wayne family at Wayne Manor. When a young Bruce Wayne's parents were murdered, Alfred continued taking care of him and raised him as his own. When Bruce eventually grew up to take on the persona of the vigilante Batman, Alfred would be one of the few people who knew of his identity.

Alfred took care of Batman when he was in his coma. In the meantime, Alfred had taken up the persona of the crime-fighting Macaroni to help defend Gotham in Batman's absence. When Batman finally woke up and was ready to get back out on the streets again, Alfred forbid him, telling him he needed to heal fully first. However, he defied Alfred's advice and went out before he was ready, getting into a bad fight with Bane and almost dying at the hands of Two-Face's goons before Alfred as Macaroni showed up to save him with the help from Batgirl.

Batman is still anxious to get back out on the streets and complain to Alfred about the ridiculousness of being cooped up in the Batcave whilst Gotham is being overtaken by Parademons. Alfred tells him the city needs him to be healed first and that he will not allow him to get back early again. He gives him a cup of tea which he quickly spits out, complaining of it being too hot. Alfred tells him he could simply wait for it to cool, to which Batman coldly replies that he could, at which point Alfred starts blowing on it for him.

"A Fight Worth Fighting For"[]

Main article: A Fight Worth Fighting For

Alfred is aiding Batman while he is looking through the city's security footage to find his Batplan. Although when Batman tells him this, he tells him there is no need to narrate the situation and later tells him how the new voice memo for the Batcomputer works. After Batman sees the Joker has returned and is with Harley Quinn, he decides it is time for Batman to return. Alfred agreed that he is ready but tells him he needs to disinfect the Batsuit first.

Alfred watches from the windows of Wayne Manor as Doctor Psycho projects Poison Ivy's memory of sleeping with Harley Quinn onto the sky. He initially closes the curtains as to not see before changing his mind and peaking out through them.

Alfred and Batman watched Tawny Young's broadcast as she reported that Commissioner Gordon had once again been unable to stop Harley Quinn and Poison Ivy from getting away.

Alfred came to meet Nightwing at the bus station when he arrived in Gotham City from Blüdhaven. However, their car was stolen by Harley and Ivy who came on the same bus so they were forced to take a taxi instead. Later, he joins the Batfamily to fight Firefly who is burning down the Old Gotham Corn Factory and gives Nightwing a ride on his penny-farthing bicycle, which Nigtwing is less than thrilled about. At the scene, the group was watching from afar while Batman told them his plan when suddenly they noticed Nightwing had gone ahead and confronted Firefly without them, ruining their plan and causing a fight to break out. Alfred helped Robin and Batman get buckets of water to put out the fire whilst Nightwing and Batgirl both went after Firefly at the same time, causing them to swing right into each other, allowing Firefly to get away. But not before setting more fire to the factory, causing the corn inside to pop and covering the Batfamily in a sea of popcorn.

Following that disaster, Batgirl decided they needed to work on their team work and signed the Batfamily up for an escape room to build camaraderie. However, they soon discovered it was a death trap set up by the Riddler where they needed to solve it within a time limit to be let out. The rooms soon shifted, trapping Batgirl and Nightwing in different side rooms while the rest of the team got stuck with Harley's Crew who were there for a similar reason. They search the room for the solution and Alfred starts sadly playing a flute as their odds were looking more and more slim. However, Batman eventually solved the puzzle and the Batfamily returned to the Batcave before going out on another mission with Alfred again giving Nightwing a ride, this time in a helicopter.

Main article: It's a Swamp Thing 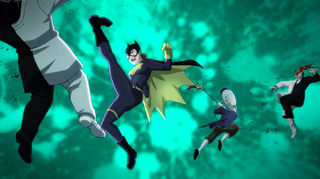 Batgirl and Macaroni save Batman 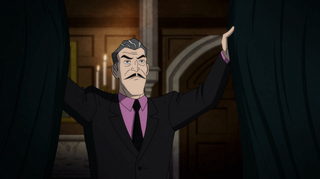 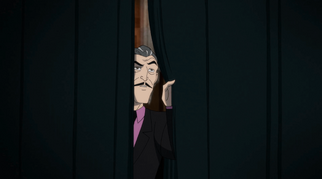