Now a member of the Legion of Doom and The Joker’s equal, Harley finds herself spending time with him. Will she slip into her old ways?

Harley Quinn and her crew watch an introductory video to the Legion of Doom, noting that Black Manta physically attacked Doctor Psycho in the background of the recording, although Psycho claims "nothing racist" was said. Afterward, Lex Luthor welcomes them into the Legion of Doom and the Joker himself praises Harley's ascendance. Although Doctor Psycho, King Shark, and Clayface all express concern over Harley falling for his tricks, she assures them that nothing had changed. Despite this, she reacts quite strongly to the Joker's nod in her direction.

Afterward Harley meets up with Ivy and apologizes to her, but Ivy is concerned over Harley's quickness to "abandon" her. Harley assures Ivy that she had no intention of doing so and even offers to help her on an eco-terrorist mission to take down Lex Corp's "PlanetWide Pavers" land development division. Following that, Harley was shown to her new office, but her crew was taken downstairs with the rest of the henchmen. Although Doctor Psycho protested that they all had powers, their escort did not care, and left them there to be hired out by Bane - any henchmen can be requested for work by any Legion member.

Bane's intended mission is to "blow up Todd", a smoothie worker who always deliberately calls him "Bang" instead of "Bane". Above, a meeting of the entire Legion of Doom is underway. The Joker asks for 600-800 million dollars to build a tower with his face on it, and although everyone initially is open to funding it, Harley opposes it because he could simply take over the airwaves or repurpose an existing tower. Lex Luthor agrees, saying that the Joker had come up with the icing before he "baked the cake", and insists that he flesh out his idea before presenting it again, which the Joker reluctantly accepts.

Afterward Bane expresses his appreciation to Harley for standing up to the Joker, until the Joker himself arrives and, oddly, expresses his own gratitude to Harley for pointing out that his plan needed work. He then invites her out for a "work drink" to discuss the plan in detail and properly flesh it out, and although Harley initially rejects him reflexively, the Joker insists that they wouldn't be having sex and that they were colleagues now. He also offers that he can help her "game the system", before leaving

Later, Harley's crew tell her about being forced to work for Bane, so Harley decides to take the Joker up on his offer to get her crew reassigned away from Bane. At a wings restaurant the Joker reveals that he himself pays Todd to misname Bane, and that Lex Luthor could get her crew reassigned because he wants to keep her happy. The Joker claims this is because Harley is an "asset" and a "big deal", which Harley blushes to. Meanwhile, Ivy is preparing for her mission, only for Harley to ask to reschedule due to being with the Joker. King Shark also calls Harley when Bane arrives to take them for the mission, but it goes straight to voice mail as they had gone off to a romantic dinner on a yacht.

After kicking the original owners of the yacht onto a life raft, Harley suggests that the Joker could build his tower underground and have it launch upward into the air "like a jack-in-the-box". For once, the Joker actually agrees with her idea, saying that "the student becomes another master", insisting that the phrase is "the student becomes a master equal to the original master, but not with more mastery than that master." He then says that he is glad Harley struck out on her own, but is interrupted by the arrival of Batman. The Joker tosses a gas grenade at him which pushes him away and prepares to board his helicopter to flee.

In perfect mirroring of the Joker's abandonment of Harley Quinn in Til Death Do Us Part, the Joker begins by saying "You know, I'd love to take you puddin'...", only instead of saying "but I'd never deny you the pleasure of buying me time to escape", this time he actually invites Harley to come with him, and she squeals in delight. As they speed away from Batman, Harley says she dreamed of escaping together with him, and they begin kissing passionately. Just as Batman's ship comes parallel with their helicopter however, the Joker chooses that exact moment to shove Harley out of the helicopter and to the waters below.

Harley's abusive relationship flashes before her eyes, every betrayal from the Joker and all her loyalty to him, up until the last where he gleefully pushed her to her death. She curls into a fetal position as she plummets toward the waters below, only for Batman to break her fall with his ship at the last moment. While looking down on Batman from atop his aircraft, he tells her that "some things never change, Quinn". She then tearfully slides off the aircraft and dives into the waters below, unharmed.

Meanwhile, Bane becomes impatient with King Shark planting the bomb, and activates it prematurely, which launches King Shark out of the smoothie shop with his dorsal fin blown off. Before passing out, King Shark reports that Todd doesn't work Wednesdays. At the hospital Ivy came running to check on him, and along with Doctor Psycho and Clayface, they saw footage on television of Harley Quinn kissing the Joker (but not him pushing her out of the helicopter). They feel this as a betrayal, going back with the Joker rather than trying to get them out of working for Bane and avoiding King Shark's injury, so they all quit. Poison Ivy also decides to do her mission solo, only to end up captured by Scarecrow.

The Joker escapes with Harley 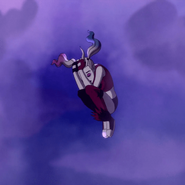 Harley falls from the helicopter

Ivy gets captured
Add a photo to this gallery

Harley Quinn Episode 109 Watch on DC
Add a photo to this gallery
Retrieved from "https://harleyquinn.fandom.com/wiki/A_Seat_At_The_Table?oldid=5677"
Community content is available under CC-BY-SA unless otherwise noted.