Determined to become one of the vaunted Legion of Doom, Harley attempts to make a big splash by crashing one of their criminal enterprises with the help of her BFF, Poison Ivy.

The Joker found Scarecrow and Bane gossiping about his breakup, which angered him and prompted him to kill Howie Mandel on live television for joking about the breakup. He used the airing to publicly respect Harley Quinn's supposed wish to "drift into the darkness of total anonymity". In response, Harley logged into Joker's calendar and found out he was going to the Gotham Mint, so she decided to go as well in order to one up the Joker and convinced Poison Ivy to come with her despite her annoyance at the situation.

Unfortunately Harley arrived to discover that it was a Bar Mitzvah held for The Penguin's nephew, Joshua. She insisted on staying and impressing the Legion of Doom anyway however, leaving Ivy to be propositioned by Kite Man. Harley attempted to ingratiate herself with Two-Face, Scarecrow, and Bane, but the Joker took them away from her. In an attempt to one up them, she decided she would rob the Gotham Mint. Meanwhile, Kite Man had just given away Poison Ivy's pheromones to some kids, which makes them fall in love with Ivy and then die.

Harley fought her way into the Mint only to discover that it was a prop robbery for the Bar Mitzvah. Angered over ruining it, they captured Harley even as Ivy arrived at her house for the antidote with Kite Man, who was under the impression that they'd be having sex. Ivy and Kite man flew back to the Bar Mitzvah while Harley undermined Joshua's confidence. Eventually, Joshua caved, at which point Ivy arrived to save Harley from his father's wrath. The Joker then demanded that Harley admit to being nothing with him, but she refused, so he sent the Legion of Doom after her.

As Bane, Scarecrow, and Two-Face converged on them, they set Kite Man to handle Bane, only for Bane to easily knock Kite Man aside. Harley managed to dispatch Scarecrow with Ivy's assistance, only for the Joker to have the Legion of Doom surround Ivy and Harley. However, he insulted Bane in the process, hurting his feelings and allowing Harley to convince the other villains not to let the Joker simply "bully" them into compliance. Without allies, the Joker went to kill Harley himself, only to be confronted by Ivy and surrounded by her plants. It seemed like he would lose until he received a phone call from his contractor, taking that as an excuse to leave.

Afterward Harley expressed her desire to join the Legion of Doom, although Ivy tried to dissuade her. Frank the Plant interrupted them about the boys who were about to die however, so Ivy administered the antidote and sent them on their way.

See also: All images from "A High Bar"

Harley Quinn enters the bar mitzvah in the Gotham Mint

Harley and the tiger 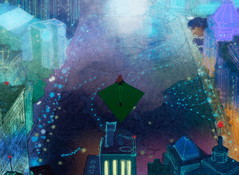 The Joker after The Penguin tranquilized Harley Quinn

The Penguin, Scarecrow, and Two-Face surround Harley and Ivy

Ivy defends Harley from the Joker

Joker is scared by Poison Ivy